Moved by a Wheel 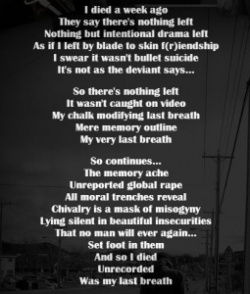 From the original Track by SOHN:

Beyond your very last breath

So exist against the deficit

A deluge against regret

Until the very last...

All this fuss over nothing
Reinventing yourself in fire infused sand

The first light invention flash bulb: wheel
All this searching for something that's seemingly...

But fantastically real
All this fuss over everything
Reinventing the domestically abused wheel
All this searching for something that's not real.

The approximate intentions of reality…

But it isn’t…
So says the media wounded intel

She died a week ago

A carnal intoxicated bargain of compliance

Gambling with the disguise of wolves

A one (k)night phantom or hero

Lead her to her last breath...

In time a dementia avalanche

Gallery of videos beyond detail

To be the last time
The very last time...

Something not even real

I died a week ago

They say there's nothing left

Nothing but intentional drama left

As if I left by blade to skin f(r)iendship

I swear it wasn't bullet suicide

It's not as the deviant says…

Chivalry is a mask of misogyny

That no man will ever again...

Set foot in them

And so I died

Was my last breath

I`m aware that this kind of `mindmix` stuff is not to be approached expecting too much clarity...but
I`m intrigued by the (funereal urn?) shaping of the text in the picture.It seems too civilisedly
out of kilter with the rest of it.