The poets now standing near platform one 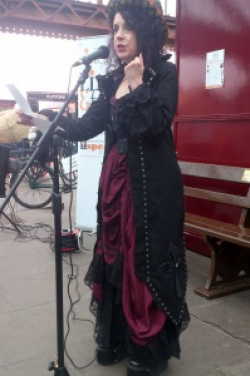 “What’s this, a Punch and Judy?” inquired one curious bystander as the Worcestershire literature festival’s Martin Driscoll was setting up chairs, mic and amplifiers for the Steam Poets on the concourse at Kidderminster Town station on the Severn Valley Railway.  I explained to him that it wasn’t Punch and Judy, but poetry.

“Dylan Thomas?” he asked, hopefully. I replied, a tad sniffily, that I didn’t believe that Dylan Thomas had written many, if any, poems about trains – another black mark against him in my book. The bystander shook his head, and walked away, possibly regarding this as a niche attraction that wasn’t for him.

But reading poetry about trains on a steam railway station ticks so many boxes for me, my pen almost runs out of ink. On Thursday 26 June compere Dave Reeves, “steampunk poet” Suz Winspear, pictured, Bert Flitcroft, Alison Absolute, Rohit the Poet, and myself – and not forgetting “Emergency Poet” Deborah Alma, parked in her 1960s ambulance outside the station to offer poetic remedies to passersby – attempted to attract the attention of train travellers with a quick-fire selection of railway-themed poetry, plus a dash of gothic horror, and some tunes from Dave’s squeezebox.

Dave Reeves, poet in residence at the Black County Living Museum in Dudley, and compere-interviewer of live lit internet radio Radio Wildfire, kicked off proceedings with his comic, dialect-tinged song ‘The Owd Wuss ‘n’ Wuss’, about the long-gone Oxford, Worcester and Wolverhampton railway, colloquially known as the Old Worse and Worse. Alison Absolute, last year’s Worcs lit fest slam winner, offered a limerick about ‘Adlestrop’, another poem about a disappointing, brief encounter on a train, balanced by a more rewarding sight of fingers dancing over a laptop on another journey. Bert Flitcroft used a succession of railway metaphors – “reading signals can be difficult” - in a poem called ‘S.P.A.D’ (signal passed at danger, a railways term to log incidents) to describe the end of a marriage, and a wife who “passing a red, pulled out of the sidings”.  Bert, a man after my own heart, also issued a plea for a reassessment of the much-maligned anorak wearer:  “You never met a dishonest trainspotter, underlining numbers he hadn’t seen.”

Rohit Ballal (aka Rohit the Poet) delivered a paean of praise to the steam train, “The lion of the revolution standing proud,” while steampunk poet Suz Winspear – she works in a Victorian museum by day, but by night … - took us a trip to the dark side of the 19th century with poems such as ‘Reanimation’ and ‘The Automatic Clown’.  I contributed poems about an old branch line, the statue of Betjeman at St Pancras, and a “found” poem made up of famous lines of other poems about railways, including ‘Adlestrop’, of course, ‘The Whitsun Weddings’, and ‘Night Mail’. I also read a tribute to the Severn Valley Railway itself, which I’d knocked out in the café that morning.

A well-deserved tribute, for the station staff at Kidderminster were unfailingly good-humoured and helpful to us, as they tried at the same time to go about their railway business.

We performed three sessions of Steam Poetry between 11am and 3pm, trying to stage it just before/just after the departure/arrival of trains. Timetabling is a complex business, of course, and it must be conceded that our first session was thinly attended. Things improved for the second session, and by the third we had a packed audience, made up of a coachload of older people waiting to board their train, who had been persuaded to listen first to some poetry. Some of the credit for assembling this audience should go to Bert Flitcroft, who is experienced in dealing with the general public from numerous readings in libraries – a poet with the human touch.

Cherished memories of the day include Dave Reeves, a masterly MC, manipulating the mic to mimic the sound of a steam engine puffing up a hill, and the Goth-garbed Suz Winspear wreathed in smoke and briefly drowned by whistles as the Pannier tank from Bridgnorth arrived in triumph. A truly Victorian moment.

The lit fest’s Martin Driscoll is already talking about timetabling Steam Poetry on the festival programme again next year, with a few tweaks to the scheduling and staging. I’d love to be on that train again.

◄ Look At All The Women: Cathy Bryant, Mother's Milk

Monthly poetry magazine to be launched next month ►

Cheers, MC. Proud to be a Steam Poet! It could be the start of a new poetry movement, backwards in time ...

Hearty congratulations are due to all those who
took railway poetry as seriously as this
endeavour indicates. A superior example of putting your poetry where your mike is on
behalf of our love of railways...but especially
the steam puffers!