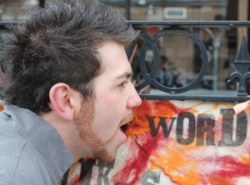 Good to see this. Steve had quietly submitted a poem to our forthcoming Words from Worktown anthology which Scott was happy to accept. Then we find he's just walked away with the Saboteur Award.Impressive.

Steve seems like such a lovely guy and really is incredibly talented. He's not a shouty in your face performer so I was surprised he made the shortlist but seeing him win is fantastic. Just hope this gets him the recognition he deserves further afield.

so is he a good actor or a brave poet?

Brilliant to hear this. Steve has never been good at selling himself and to see that he has managed to get this award on such a high profile shortlist is great.
There will be a lot of people wondering 'Steve who?' but hopefully not for much longer.
Can't praise him, his performances, his selflessness enough.
Bravo that young man.