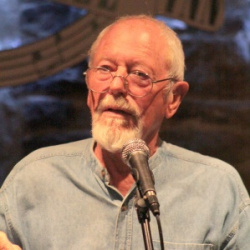 John Foggin has won the Lumen/Camden poetry competition, his second big poetry prize within a few months. John, pictured at Puzzle Hall Poets in Sowerby Bridge last year, is based in Ossett, West Yorkshire. He also recently won the £1,000 Plough poetry prize, and was highly commended in the York literature festival poetry competition.

Andrew Motion, patron of the Lumen and Camden Poetry Series and judge of the annual competition, picked John’s poem, ‘Camera obscura’, as the winner. The prize includes a chapbook released by Ward Wood Publishing in November this year, with John working with editor Adele Ward in the coming months on the poems for his collection. He will also receive 50 copies and will have a launch reading in the Camden venue. Highly commended in the competition were: Cara Jessop (Old Adam’s Likeness); Mark Leech (Leaf Lessons); Richard Westcott (Corporal Yukio); Joan Michelson (Vision); Gillian Henchley (Half Siblings Discovered); Cameron Hawke Smith (Walking to Addenbrooke’s); Roger Caldwell (Defence of Essex); Lorna Liffen (If the Fifth Born); Chris Duggen (A Place to Leave My Shadow).

This is John Foggin’s winning poem:

The reason for your being here

is out of sight. They can't be seen –

your Cause's colours sewn inside

The camera sees the moment

you began to die:

the jockey, trim in silks, is doll-like

on the grass and seems asleep;

his mount is spraddled on its back;

its useless hooves flail at the sky.

your hair's still not come down;

you're frozen, inches from the ground;

your boots are neatly buttoned,

You're stopped in time. No sound,

no texture, no sour odour

of bruised grass and earth. Just

silence and the alchemy of light.

How did you comprehend

in that white moment

when the dark came down?

it's business neither truth nor lies.

It shows a fallen horse. A woman falling. A crowd

in hats and blazers staring down a long perspective;

the field intent upon the distant fairy icing

Until the image blurs, dissolves in silver flowers,

it's there on celluloid in shades of grey;

the camera only says that in that instant

you are dying, and everyone has looked away.

◄ My Family and other Superheroes: Jonathan Edwards, Seren