My Family and other Superheroes: Jonathan Edwards, Seren 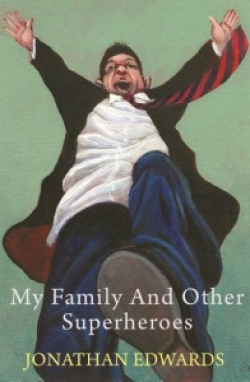 This collection, in parts nostalgic and emotional, reveals a poet preoccupied with heart and hearth. However, Jonathan Edwards’ characters and places stop short of being caricature, and his appeal to emotion does not trivialise the poignancy and pathos of his observations. Edwards is the poet as sociologist, as well as observer/participant; he makes the customs and culture of the hill tribes of south Wales as exotic as that of the Trobriand islanders.

In section one he records for posterity the myths and legends of one everyday family. ‘My Family in a Human Pyramid’ is a fabulous start, using the metaphor so cleverly that it is impossible not to visualise them tottering, to the amazement of the neighbours. Edwards reveals the welcome physical closeness of his family, saying of his father: “He grabs my ankles,/ half holding me up, and half holding me close.” This is echoed in ‘Evil Knievel Jumps over My Family’, where “Before he lands,/ there’s just time to glance along the line:/ though no one’s said a thing,/ all we Edwardses are holding hands.”

In section two the sociologist takes himself away from the comfort of his family to the harsher social and physical environment of a changing Wales. “These shoulder blades are Snowdon, the Brecon Beacons./ Walk gently on them.” (‘Anatomy’). His ‘View of Valleys Village from a Hill’ puts his Lillipution world in perspective, highlighting its vulnerability and impermanence. With God-like detachment he says: “From here, I could reach down/ and fuck with them… From here I could destroy everyone I know/ by blinking.” His compassion includes the “single mam/ pushing a pram, her head down and her face/ so much a frown, it’s like she’s trying to mow/ the pavement.” (‘View of Valleys High Street through a Café Window’). Dominated by a sense of loss, ‘Colliery Row’ is a forensic analysis of a street which has seen better days, “the terraced houses, semi-detached lives./ What is a street for?” To me that is a profound question. ‘Owen Jones’ (the hunchback in the kebab house?) symbolises wasted talent, a wasted generation, a past with a promise of a golden future.

So much for sociology, you say. What of the poetry?  In ‘The Death of Doc Emmett Brown in Back to the Future’ (Edwards likes his titles) he demonstrates in a short villanelle that while he can bottle nostalgia, there is no slackness or overindulgence in his technique. Imagery itself does not separate poetry and prose, neither does style, but around the classic constructions that poetry lays claim to, Edwards demonstrates his credentials with rhythmic and disciplined writing.

Section three moves away from the comfort of family and familiarity of landscape into the bitter-sweet world of adult relationships. Love, whether unrequited, lost, or just careless, injects another dimension to the collection. ‘Girl’, a paean to a hard, street-wise, confident young woman, may be ruined by the last line, or elevated by it: “That girl’s the girl. That girl’s the girl for me.” ‘Us’ chronicles a fruitless relationship: “Me putting my mouth where my money is, … You, with your mouth so closed,/ it’s a buttonhole beneath your nose”. In ‘The Doll’ altogether darker issues are suggested, leaving the reader hanging. ‘Decree Nisi’  is a masterpiece in demonstrating Edwards’ ability  to elevate the prosaic:

Kelly, this week I’ve filled the house with strange men:

The plumbers and plasterers, the ’leccies and lackeys,

The chippies and butties, the world and his mate.

But it’s all a front for his deep-down heartache. Confessional poetry can make uncomfortable reading. Having got to know and like the poet, we’re suddenly on first name terms with his ex-wife  In ‘Jack- in-the-Box’ he can’t escape Kelly. She springs up everywhere.

In section four Edwards casts off some of his chains, literally in ‘Bookcase thrown through Third Floor Window’. In the ‘Restaurant where I am the Maitre d’ and the Chef is my Unconscious’ he is never in charge of his own restaurant, never gets what he asks for, but always goes back for more and finds himself “picking bits of gold out of my teeth”. A sequence of animal poems offer a case study in personification, with ‘Seals’ “barrel rolling, forgetting which end of him/ is which”, giraffes “stupid as window cleaners”, lions “sunshine with teeth”, and ‘Flamingos’:

February. Outside’s a place of grey

But with your silly-billy, Vegas waitress

Fuck that you say, let’s all be fabulous.

Then there are new people, new  workers. There’s respect for ‘The Bloke selling TalkTalk in the Arcade’ who is admired for his “patter, the natter, the gift/ of the gab … He’s got the opening line, the spiel,/ the feel for people”. Edwards shows respect and appreciation for a fellow wordsmith, who, when he “packs up/ his tongue for the day and walks into the world,/ just like you, like me , like anyone/ he's got the air, the night, the setting sun”. He is equally respectful to Rhian, queen of the mug rings at Starbucks, and ‘The Girls on the Make-up Counter’, who, having become your “name-badged friends” at night, stand before a mirror “then step into a city/ where every other woman wears their face”. Behind the mask, of course, there is the stress and breakdown of old values. In ‘Brothers’ romantic notions of family life are quashed by “You know the sort: the elder has a child/ who’s got her mother’s mouth, her uncle’s eyes”. ‘On the Overpass’ has a quiet menace and sense of doom as its subject courts danger by hanging off the bridge “now with my right hand, now with my left./ I like that moment when I’m teetering/ and free”.

There is a lot to like in this collection, which relies heavily on pathos, heart firmly on its sleeve. The Edwards family ooze the confidence of the truly loved; they confirm that destiny is in their hands. In a scarred landscape they symbolise the togetherness, optimism and resilience needed to carve an uncertain future from a vivid past. Going back to the opening poem, ‘My Family in a Human Pyramid’:

And now to why we’re here;

could the Edwardses together reach a height

that the youngest one of us could touch a star.

Now that is family. Maybe it’s that kind of closeness that is difficult to recreate in a changing world.  Maybe it’s those kinds of bonds that lock us into the collective past, rather than prepare us for an atomised future.

Jonathan Edwards, My Family and other Superheroes, Seren, £9.99

◄ Poets in all their glory at Write Out Loud Wigan tonight