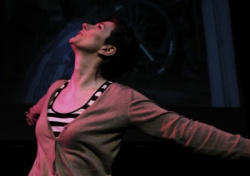 Three northern writers - Louise Fazackerley, Matt Miller, and John Hamilton May - have been given the chance to work with BBC Radio 3’s The Verb as recipients of the Verb New Voices award.

Verb New Voices was created by Arts Council England with the BBC, and is managed by New Writing North. The three writers will receive mentoring from partner organisations including Writing Squad in Yorkshire, Contact Theatre in Manchester, and ARC in Stockton-on-Tees, a place on an Arvon writing course, support to develop a live show, and a special commission to create a piece of work for BBC Radio 3’s The Verb, which will be broadcast this autumn.

Louise Fazackerley - pictured at Totally Wired, Lancaster - is well known to Write Out Louders in Wigan and elsewhere in the north-west. She describes herself as “working class, educated, northern, can stand her ground on the page as well as on the stage”. She works half her week as a performance poet and workshop leader, the other half in social work with young poeple and their families, but plans now to become a full-time creative artist.

Her partner is a former army medic who served in Afghanistan, Iraq and Macedonia, her father was a soldier, and for Verb New Voices she has been thinking a lot about war. “My partner, Daniel, came back from Afghanistan with post-traumatic stress disorder because of the deaths he witnessed,” she said. “My estranged dad was a soldier in Northern Ireland. I’d like to write about some of the things related to modern warfare.”

Louise’s working title for a piece intended to be a hour-long touring poetry performance, with a musician and possibly a dancer, is ‘Love is a Battlefield’. She plans to do the main body of the writing over the next month, with an excerpt from it on the radio in October. She is an established slam performer, wining the Prestwich book festival title last year, has appeared at many Write Out Loud open mics, and added that she owed a lot to the encouragement she received when first performing live: “If it wasn’t for Write Out Loud Wigan, none of this would be happening.”

Playwright and spoken word artist John Hamilton May, from Thirsk, North Yorkshire, said: “Emerging artists are often seen as too large a risk to invest in, but Verb New Voices is the perfect opportunity to have my work nurtured and showcased on a national platform specifically developed to encourage unheard talent.” The show he wants to develop is called The Jumble Male, which aims to explore what it means to be young and male in the UK.

Matt Miller is from Ryton, a small town to the west of Newcastle upon Tyne, and is studying creative and professional writing at Nottingham University. He performs with The Mouthy Poets and participated in the Cultural Olympiad. Miller wants to explore “The knowing of place ... I want to use this project to explore the stories and the character of Tyneside, my home, in a way I never did while I was growing up there, and to share the experience of my discovery with others.’

The Verb’s presenter, Ian McMillan, said: “Verb New Voices has discovered three northern writers who definitely have something fresh and special to say and who are working towards new ways of saying it. With John Hamilton May’s gentle rhythms and fine observations, Matt Miller’s dramatic powers of urban storytelling, and Louise Fazackerley’s despatches from the heart of Wigan, all the writers are speaking with voices that ring with truth and shiver with promise. I’m really excited that they’re going to be on The Verb and I can’t wait to introduce their work to a wider audience.’

Alison Boyle, Arts Council England’s literature representative, said: “We expected strong and distinct northern voices to come through, and they did. Of the 102 applications, what caught each judge’s attention were the artistic ideas and presentation styles, with two winning artists under 30 years old. We look forward to seeing what great art transpires over the coming months. Other artists – not just the three winners – communicated a uniqueness of voice in their applications, and we look forward to exploring how they too can be supported in their artistic endeavours.”

◄ He wrote in the trenches, and died in 1918. But Isaac Rosenberg did not see himself as a war poet

Poets in all their glory at Write Out Loud Wigan tonight ►