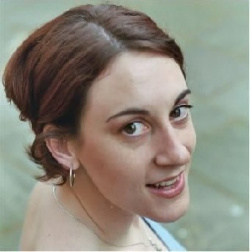 Jude Simpson (pictured): "Growing Up Games", Pleasance Courtyard, Pleasance Beside, 12.15pm
This was a delightful show by a charismatic performance poet.  Someone who can conjure up magic through a poem about a Kenwood Mixer has to be good!  And we even had theKenwood there on stage, spinning around with a rhythmic hum as the perfect backing track.
However, if this show were to be seen as a cookery demonstration it would have to be cord-en-bleu and would beat 'Ready, Steady, Chef' hands down.  The recipe - take one talented and charming female poet, add a large dashing of humour, mix with poignant, telling moments from her life, plus a touch of freshness and vulnerability, and voila!  Serve accompanied by a song or two, and you have a unique culinary experience, best savoured in a relaxed atmosphere along with an appreciative audience.  Just one warning - this can be quite hot stuff.
Jude structured her performance around the theme of growing up, involving the audience even whilst we queued beforehand outside.  We all had to complete a piece of paper, stating what made us feel not grown up and what made us feel not grown up.  (An easy one for me, being 4'11" - high heels/flat heels - they don't call me the 'pint-sized poet' for nothing.)  Jude's easy, relaxed attitude towards getting the audience involved continued throughout.  At times, there were elements of stand-up in her act, but she remained essentially a poet - and a very good one at that.  We journeyed with her through social satire on 'The Brackenbery Mummies' (sort of a yuppie version of the yummy-mummy syndrome) to even a love poem for a certain man-about-town manager of Chelsea Football Club (a tasty 'Portugeser'), which was not without its own irony.  Even though the audience was predominantly female, the show did threaten to descend into a discussion of football at this stage, but we were soon back into the poems, culminating in Jude's description of when she decided to give up the desk job to become a poet - "Like birds I trained my words until they could fly and set them free".  However, everywhere in the show was a sense of fun, such as in Jude's 'Spinster Wrap', which reclaimed the word 'spinster' and conjured up a character more akin to a gangster, 'the knitting pattern dealer' who relishes cardies and Batchelor's Cuppa-soup.  Yet the fun never ignores the serious, and even in this poem celebrating the solitary life, lines like 'no-one can leave me' resonate.
Perhaps the only thing to criticise are the inclusions of a few songs, which meant there was less poetry, but the audience loved these too.
Five stars for an enjoyable and uplifting experience.