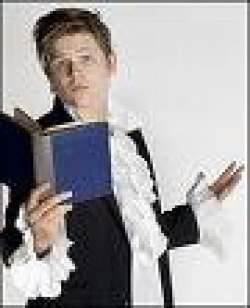 "Luke Wright: Man and Poet", Pleasance Courtyard, Pleasance Beside 5.10pm
Luke described his new show as a 'voyage of discovery of what kind of man he was' and promised it would be 'sweaty' - which it definitely was.  (Maybe his wearing a tight white shirt was not such a god idea.)
Luke is well-known as part of Aisle 15 'Boy Band Poets', but this was a solo show, with lots of vibrant energy, as well as sweat.  It was partly stand-up but mixed with what someone sitting next to me  described as 'coming-at-you' poems.  These were dynamic and worked well, but tended to be delivered all at the same pace and energy level - even a love poem for his wife, which albeit romantic, might have benefited from a clearer change in tone.  The poem which seemed to go down best was a diatribe against Midland Mainline, with which all the audience could empathise (particularly those like me who have to travel GNER).
The show was structured in autobiographic 'chapters', though for someone relatively young like Luke, it was hard really to decipher how each phase had yet really led to great change.
However, he is nevertheless a great entertainer and the audience were loudly appreciative, particularly of the stand-up elements and humorous anecdotes, varying from the traumas of being born with 'a big gay face' to road rage incidents.  These were also infused with insightful moments, such as how mothers later fill us in on details going on that they could never tell us when we were younger - as Luke said, "like later being given the director's cut of your life'.
Four stars for a great entertainer.