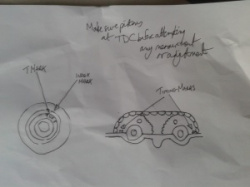 I carry a notebook most of the time

the idea, it seemed, to record my impressions

of being and living and all the worlds charms

but it was hijacked and now, instead,

lists the timing and clearance of a CBR

alongside the method for removal of a Zetec

I may be reminded of its primary task

as I stare through the glass, at the spiders posting

poison pen letters to all that pass

and the birds as they nest into the tatters

of a Union flag

but mostly, for now, it’s a greasy mess

◄ riddle me this fatman

this made me smile partly out of sadness