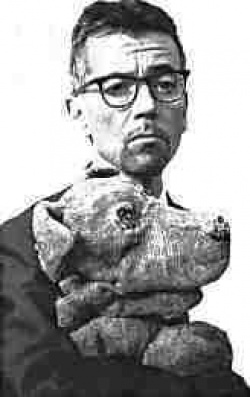 John Hegley (pictured) - 'Letters to an Earwig', Pleasance 2, 1pm
John Hegley, along with John Cooper Clark, was one of the pioneers of modern performance poetry and, for many years, practically its sole representative at the Fringe.  It's great to see him back here each year, doing his stuff.
This show has much new material, as well as a few old favourites (yes, including the perennial vertically-challenged house in Luton).  This time, it seemed a lot more visual, with Hegley even inviting audience members to draw and add to his collage on stage, along with a great poem taking the odd swipe at Picasso.  Perhaps also for visual effect, he has a swing on stage from which to read; that must be an art in itself.
Hegley remains a master of audience engagement - though he does tend to exercise a certain amount of positive discrimination towards persons wearing glasses.  He even makes his admonishments endearing - 'No, no, no!  Wait until there is a consensus on applause.'
The actual 'Letters to an Earwig' poems range from a ridiculous but poignant invocation of childhood to a surprisingly romantic declaration of love by an ant-eater.  Perhaps a bit more poetry and less song would have been welcome, but it is hard to fault this maestro.
Four stars for this medley of comedy, great voice, song, guitar (sort of) and superbly entertaining poetry.