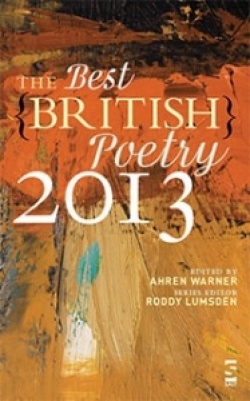 In his candid introduction to this anthology, editor Ahren Warner uses words such as “dubious” and “absurd” to describe the idea of selecting the “best” poetry. Warner, who is also editor of Poetry London magazine, even admits to including some poems that he does not personally enjoy, because of their “technical brilliance”. On the other hand, he does feel that all the poems included are “important”. He adds: “These poems seem to me to be valuable contributions to the art form. As such they deserve to be read and re-read.”

Warner concludes his introduction, as he must, by referring to Salt’s decision, announced last year, to cease publishing single-author poetry collections, while planning to continue issuing yearly anthologies. “Such things do not make money, apparently anthologies do,” he observes ruefully.

The Salt anthology’s poems have been garnered from UK-based poetry magazines, literary journals and online publications between spring 2012 and spring 2013. The book includes informative notes from the poets. Thus Dai George, whose ‘Seven Rounds with Bill’s Ghost’, first appeared in Poetry Wales, explains how a poem about his grandfather growing up on the South Wales coalfield in the early 20th century was rewritten from an earlier, “straightforward and laudatory” version at the suggestion of Nick Laird: “I saw that my feelings were much more complicated than I’d thought.”  George’s first collection, The Claims Office, was recently published by Seren.

James Brookes’s ‘Amen to Artillery’, which first appeared in The White Review,  owes some of its genesis to coming upon the Amen-Artillery volume of an American English dictionary “in the HG Wells public house in Worcester Park, London. Thanks are therefore due to the British poet Phil Brown for holding his birthday celebrations there in 2011.” Brookes also acknowledges the help of Roddy Lumsden, who is the series editor of the Salt anthologies, in sharpening the poem while editing Sins of the Leopard, Brookes’s first full collection, also published by Salt.

Helen Mort’s title and first line, ‘Admit you feel like all the ice skates in Brazil’ (Poetry London) came to her while running, but the problem “about writing while I run is I know what it should sound like but I’m not always sure what it should look like”. Andrew McMillan explains that his poem, ‘if it wasn’t for the nights’ (The Rialto), is also the title of an Abba song from their sixth studio album. And so on. Such insights from the poets themselves are often entertaining as well as informative; only occasionally, as in Mark Waldron’s discussion of his prose-poem ‘Collaboration’, do they increase bewilderment.

The anthology contains more than a smattering of well-known names, including Emily Berry, John Burnside, Matthew Caley, Leonitia Flynn, Philip Gross, David Harsent, Chris McCabe, John McCullough, Glyn Maxwell, Helen Mort, Sean O’Brien, Ruth Padel, Pascale Petit, Robin Robertson, Fiona Sampson, Michael Symmons Roberts, and George Szirtes. Robin Robertson’s nature poem, ‘Finding the Keys’, is refreshing in its simplicity: “The trees are full of handles and hinges; / you can make out keyholes, latches in the leaves,” while Sean O’Brien’s ominous ‘Thirteen O’Clocks’ is flavoured with Orwell and Eliot, and packed with resonant lines: “Therefore they concentrate on sex, / Where it is always afternoon. / They say transgression sets them free: / They would have done it anyway.”

In his introduction to this anthology, Ahren Warner is, of course, justified in linking the word “absurd” with the description “best”. This anthology has no right to describe itself as the “best British poetry 2013”, as it depends, as any compilation is likely to do, on the opinion of only one or two selectors. But it remains a fascinating snapshot of contemporary poetic tastes and trends. And that is quite enough to be going on with.

◄ Finding refuge from the streets of London: poetry lends a hand

Another refreshingly even-handed review from GF.
I have a sneaking suspicion of ANY modern
poetry publication that uses the word "best"
(of British)in its title...especially when a
site like WOL indicates that there are other
avenues of publication whose content can compete on that controversial level.
Of course, it is all "subjective" in the end.
A poem that stays in the mind - even to the
extent that it can be remembered and quoted with some degree of enjoyment by anyone - is
worth the effort and the ambition. But the
word "best" is too ephemeral for such a wide
ranging art form and needs to be used very
sparingly, if at all.