Scandals, royalty, and a great loss: poetry's big news in 2013 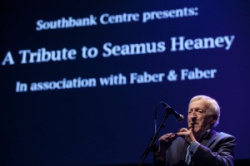 It was a year of scandalous discoveries and worries about the future of poetry publishing, and also a year in which poets were celebrated with a reception at Buckingham palace. Above all, it was marked by a great loss, with the death of Seamus Heaney, and a tribute night to honour his memory. Here is a selection of the big, and not quite so big poetry events of 2013, recalled by Write Out Loud’s news editor, Greg Freeman:

It was a poetry year overshadowed in Britain by the death of one poet. But it began with a scandal, the sensational unmasking of Christian Ward for his almost word-for-word copying of a poem called The Deer by the highly regarded Helen Mort.  The effort had won him a prize. Soon other examples of Ward’s appropriations were uncovered, right, left and centre. The poetry world was left shocked, stunned, embarrassed, trying to pretend such things didn’t happen, or that such a case was a one-off. As it turned out later that year, it certainly wasn’t. Continuing the deer theme, Sharon Olds won the TS Eliot prize with Stag’s Leap, a collection about the end of her marriage.

February saw the 50th anniversary of the death of Sylvia Plath, and Cathy Bryant  commemorated the occasion with a poignant piece published on Write Out Loud about her visit to the American poet’s grave at Heptonstall, West Yorkshire. In Qatar a poet jailed for life for criticising the emir in a poem had his sentence cut to 15 years on appeal, while in Britain Tony Harrison’s poem, v., which was condemned as a “torrent of filth” when first broadcast on Channel 4 in 1987, was aired again late at night on Radio 4. No horses were frightened this time around.

In March, there was amazement on performance poet Kate Tempest’s face on hearing she had won the Ted Hughes award for innovation in poetry for her hour-long “spoken story” with orchestral backing, Brand New Ancients.  Patricia McCarthy, editor of the poetry magazine Agenda, won the National Poetry Competition with her poem Clothes that escaped the Great War.

In April Write Out Loud was pleased as punch by the news that our reviews editor, Frances Spurrier, had won the Cinnamon poetry collection competition. We also celebrated the fact that number of Write Out Louders had had poems published in the excellent Heart Shoots anthology in aid of Macmillan cancer support, including Julian Jordon, who had quite forgotten that he had submitted anything. A poem by Wordsworth was read at the funeral for Lady Thatcher at St Paul’s cathedral, and many poems were written in reaction to her death.

In May the Norfolk-based publisher Salt announced it would no longer be publishing single collections of poetry, prompting a certain amount of angst among poets. There was more angst with the discovery of a second, serial poetry plagiarist, David R Morgan, whose name had been appearing regularly in poetry magazines for years. In an interview with Write Out Loud, the plagiarism sleuth Ira Lightman outlined some of his detection methods, and also talked darkly of the poetry world being like “a big unhappy family” with “a family secret”.

In June Cato Pedder favourably reviewed Emily Berry’s debut collection Dear Boy for Write Out Loud. Later in the year it took the Forward prize for best first collection. July saw Write Out Loud’s Gig Guide notch up its 10,000th listed event, prompting Write Out Loud’s founder, Julian Jordon, to pay tribute to the “expertise, commitment, and breadth of knowledge” of Gig Guide editor David Andrew, who also saw his own poems published in a range of publications last year. The “bard of Salford”, John Cooper Clarke, and a national treasure, was awarded an honorary doctorate by Salford University. Hollie McNish’s angry poem about being made to feel embarrassed for breastfeeding in public struck a chord, and by the end of the year had received well over one million hits on YouTube.

August means Edinburgh, and Write Out Loud was there this year, with Greg Freeman and Lettie McKie reviewing Chris Redmond’s Tongue Fu, Luke Wright, Phill Jupitus, Kathleen Jamie, and the BBC slam, won by Sophia Walker. But all that was overshadowed by the shockwaves at the end of the month when the news came through that Nobel laureate Seamus Heaney had died, his last words being “Noli timere … do not be afraid.”

Sadly that meant Don Paterson had to step in the following month to fill the yawning gap at an event at which Heaney had been due to appear, to join Heaney’s great friend Paul Muldoon at a moving evening of readings in Manchester, witnessed by Judy Gordon. In the same month of September Alice Oswald became the first poet to win the £25,000 Warwick prize for writing with Memorial, her reworking of Homer’s Iliad. Simon Armitage completed his south-west coastal trek, and said it had been tougher than he had expected. John Cooper Clarke, remembered for his caustic view of chips in his early poem ‘Evidently Chickentown’, was unveiled as the new voice-over of McCain’s. Write Out Loud launched a new service, a Poetry Directory packed with publications, competitions, festivals and other resources. And CJ Allen  withdrew his poem from the Forward prize shortlist, after accepting that he had plagiarised some other poems.

October saw the top Forward prize won by Michael Symmons Roberts, the Bridport by Daisy Behagg, and the Manchester prize for poetry by Pascale Petit. The Poetry Library celebrated its 60th anniversary, performance poetry publisher Clive Birnie of Burning Eye told Write Out Loud that it was not all gloom and doom out there, and the north-west’s very own Joy France capped a remarkable month in which she had earlier premiered her one-woman comedy show by winning the Commonword Superheroes of Slam title in Manchester. Write Out Loud’s ever-popular poetry jam  at the Marsden jazz festival was bigger and better than ever, with an extra event – The Beat is Back, a fusion of verse and improvised jazz – staged the same day.

In November the world of poetry paid tribute in words and music to Seamus Heaney at Southbank Centre’s Royal Festival Hall, with leading poets, including Muldoon, Michael Longley, Bernard O’Donghue, Carol Ann Duffy, Christopher Reid, Tom Paulin, and Simon Armitage,  all delivering spell-binding readings. The Queen hosted a reception for hundreds of poets at Buckingham Palace. A few decided not to go, and one or two were unhappy that they hadn’t been invited. Ian McMillan’s quote on Twitter - “Lovely evening … I spoke to Pam Ayres and Geoffrey Hill. Result!” – was possibly the poetry soundbite of the year. The hosts of Write Out Sale and Middleton, Rod Tame and Gemma Lees, stepped down after sterling service to pursue other projects, with John Darwin and Norman Warwick stepping into their shoes.

In December the death of Nelson Mandela prompted poetic tributes from Gillian Clarke and Maya Angelou, while Write Out Loud's Laura Taylor responded to the death of grassroots Glasgow poet John McGarrigle when a helicopter crashed into his local pub with a fine poem. Douglas Dunn won the Queen’s gold medal for poetry, and Write Out Loud’s Julian Jordon was nominated for a performing arts network’s “unsung hero” award. He missed out by just a couple of votes – not bad going, considering Write Out Louders only had three days to vote, after we heard very late about his nomination. Next year, the world!

Now, don't just take our word about the things that mattered in poetry in 2013 ... how was it for you? Let us know your poetic highlights!

◄ Catch the Write Out Loud interview on Radio Wildfire

Ringing in the new Write Out Loud at Middleton tonight ►

Hear,hear...makes the poetry world sound quite exciting and unexpectedly topical. Echoing Isabel Wigan continues to be the liveliest and most irreverent of nights, obviously not everyone's cup of tea, but with a high premium on entertainment and audience involvement.

It's been good looking back. I've had great fun, along with other Write Out Loud correspondents, in covering all this in the past year. And yes, Julian, I have alerted the necessary media - twice! - in case they weren't paying sufficient attention first time around.

Greg, a magnificently written, superbly conceived piece. You should have down this professionally you know! I hope you have FB and Twatted it?

That's a great review of the year Greg - you bring it all back so effortlessly!

I don't have any personal highlights - just know that I've thoroughly enjoyed all the nights at Writeoutloud Wigan (The Tudor) - poets of all different abilities and backgrounds, getting together to make great entertainment.

I really loved the Marsden jazz festival also; just wish we had one this side of the Pennines too.