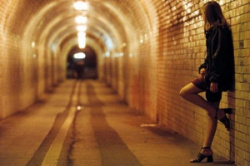 This morning Samantha is building a bonfire

Down on the waste ground in rubbish and weeds

Ferrying armloads of boxes and bin-bags

Burning a life that she no longer needs.

Out of the cardboard seep velvets and spangles,

The tools of a trade that she’ll no longer use.

Telling a story of life on the streets.

As she begins to pour on the petrol

From a split in a box something catches her eye -

She snatches a pair of scarlet stilettos,

She doesn’t looks back as the flames leap behind her

Two decades of shame spiral up in the air

Bound for a place where no-one will find her

The phone will keep ringing, Samantha’s not there.

Started at sixteen, homeless and broken,

Sharing her love was the worst of her crimes.

Alone in a city where no-one would know her,

Holes in her pockets, a void in her soul,

Some tricks to earn cash that was better than dole.

So late one cold Saturday down by the station,

Washed by the jaundice of streetlamps and rain

She sacrificed pride for self-preservation

And with soft silent tears extinguished the pain.

It never got easy but her way of coping

Was to turn off her mind as she turned out the lights,

And drift away wishing and dreaming and hoping,

Erasing the memories of all those long nights.

Sometimes the bruising would show on her features -

Most of the deep ones were on the inside,

From Alans and Brians and Colins and Dereks,

From husbands who cheated and lovers who lied.

All rented her flesh - after she took the money

In the land of the punters …

Just before noon Jane is catching a ferry,

She stands on the deck in the rain as it leaves.

No one could tell if she’s crying or smiling.

A woman rejoicing - or a young girl who grieves?

Her hair is much darker, her shoulders much lighter,

She fixes her thoughts on the journey ahead,

On a world that seems bigger, a future that’s brighter,

On a tumbled-up farmhouse down by the Med.

And the scent of wild jasmine seeps under the door,

Where brown chickens peck in the shade of a fig tree

And the breeze brings a whisper of waves on the shore.

Dusk shadows fall as she drives from the harbour

And follows the lines on the map through the night,

Northwest is a midnight, dark in the mirror,

Southeast is an ocean and daybreak’s first light.

And every new mile is an old mile behind her

And one from the journey that stretches ahead,

And farther from places and names which remind her

Of a life that is ended, a girl who is dead.

She can taste the warm bread that she’ll bake in the mornings,

Hear new words she’ll learn as she shops in the market,

Returning the smile of each person she meets.

She’ll read all those books that she never had time for,

Go to bed early and rise with the day,

Eat peaches and apricots, fresh from the garden -

Alone in her bed, from an old wooden tray.

Wear plain cotton dresses and go without make up

Her dreams grow much closer with each passing mile

And the careworn expression she wore just last morning

Is replaced with a face that is learning to smile.

Just before dawn she reaches the village,

She drives up the lane that leads to her door

Steps from the car, turns a key, throws a light switch

Her tears of relief fall to dust on the floor.

In her hands she is cradling the shiny stilettos -

The very first things that she thinks to unpack,

And the face that smiles up from the scarlet reflection

Don’t ever look back.

Oh Anthony - so glad to read this one. A truely beautiful idea and perfectly executed. If only more ladies of the night were able to make that journey - so out of reach for many. Red stilettoes do indeed carry a lot sybolism, not all of which has anything to do with eroticism.
Isobel x

Hi anthony thanks so much for your kind comments. You have a great ability to keep the reader's interest and maintain the integrity of the story throughout the length of your work.Very impressive . Sian x

One part of this piece is twice as long as te longest thing I have written Anthony! And to maintain the rhyming quality is impressive. Great images, great story too. loved it.
Winston

Quite captivating...I too want to read more ; )

Hi Anthony,
I just love these two poems. Very realistic and factual in so many lives in the first one. Yet non judgemental. I like that very much.
Then her chance to survive and lead a better life.
Taking with her just one item to remind her of her struggles and all she left behind.
It makes me, as the reader, want to read more, which for me makes it a darned good poem/story.
Next edition please. :-)