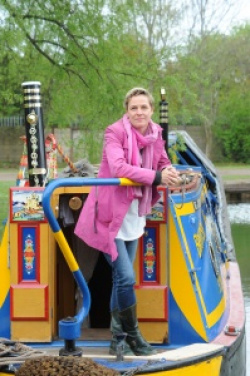 Jo Bell has been the canal laureate for a year, navigating the waterways, from the north-west to the south-west to the Midlands, in pursuit of poetry. In an interview with Greg Freeman she talks of challenging journeys, the social media friends who  rally round to help her through flights of locks, why canal folk are “the tribe” she belongs to - and why page and performance poets need to turn up to each other’s gigs.

Judging from recent postings on social media, you’ve been engaged in some tricky journeys and manoeuvres on the waterways recently with your canal boat. Can you tell us what you’ve exactly been up to?

It’s been a challenging and brilliant year, boat-wise. Last year I took the boat from the north-west right down to the south-west of England, and took up residence on the Kennet & Avon canal. This year I decided to head back to the Midlands, which meant a very adventurous journey up the Severn estuary. For a narrowboat that’s a hairy trip, but it was a truly memorable one and I’m glad I made it. I will stay put now for a few months at least.

What do you see as your duties as canal laureate? How do you divide up your time?

There is a brief for the role – a certain number of poems and blogposts, a certain number of readings at Canal & River Trust events, which are always a joy. The balance varies. Autumn and winter will be spent almost entirely in writing new work, to tour in 2014 with a show called CUT which I hope will really evoke what it means to live on the canals now.

Sometimes you send out pleas for help to get up or down flights of locks as you work your way through the canal system. How has that worked out?

Brilliantly, thanks! In the south-west I met people through Twitter in particular who I never would have known otherwise. They just rolled up to help, without knowing me at all – and many became real mates.

Would you describe yourself as someone who is in love with canals? What is it about them? Does this love come from your former work as an industrial archaeologist?

The canals are the village I belong to, the tribe I live amongst. I love them like a hometown – with great familiarity, and a respect for the less picturesque as well as the bucolic. I enjoy the industrial architecture of, for instance, Stoke-on-Trent where the bottle kilns of the Potteries are still intact along the canal banks, or the old warehouses in Birmingham and Manchester. But the places where the landscape drops away from the canal aqueduct at Pontcysyllte, or the total darkness of the Harecastle tunnel, are magical too.

Recently you’ve been asking for poems for the Waterlines website. You and other poets have also had lines from your poems carved into lock gates around the country. Do you see Britain’s waterways as essentially poetic?

No. Everything in life is potentially a subject for poetry, and the idea of the canals as “essentially poetic” implies a kind of gentle pastoral poetry which doesn’t interest me. I write about daily life, and relationships, and landscapes – it just happens that my daily life is a bit wetter than most people’s.

At the Crick boat show, you talked about a crowd-sourced poem being  “no masterpiece but a real celebration of collective memory”. Do you see poetry as primarily a communal activity?

Not at all; poems are always written by someone sitting in a quiet space, figuring out how to express themselves. The sharing of the finished poem is a big part of the pleasure, for me – but the actual writing is usually a private process. However, I do occasionally write a jolly, crowd-sourced poem for an event like Crick, and that can bring people together in a really powerful way. It’s like a one-off singalong on the bus, compared to a properly orchestrated piece of music.

Before being appointed as canal laureate, you were director of National Poetry Day for six years. How did that develop during your time at the helm, so to speak?

NPD should be a real grassroots, universal event – an annual party that poetry activists can use to highlight the work they do all year round. This year, looking at it as an observer, it’s a pleasure to see how widely it is used in exactly that way. I would have liked to do much more with it – to get poetry on buses all over the country, or projected onto national monuments – but hopefully my successor will carry on the good work!

In an interview you once said, ‘I want to see page poets learn to get their heads out of a book and do the audience justice; and performance poets raise their game to write better, more challenging material, not just the crowd-pleasing or polemical work. I want to see published poets like Simon Armitage showing up at Mike Garry or Tony Walsh gigs – and stage poets like Byron Vincent turning up at Seamus Heaney readings. We all work with words, and we should be much less territorial about sharing our skills.’ Do you still hold to those views?

Yes, absolutely. Both groups have their strengths and their snobberies; and I would love both groups to get their head out of their ass and explore what the other group is doing, far more than they do. Some performance poets miss out on the huge range of forms available to them, and stick to folk rhymes, whilst many page poets dismiss good performance as a kind of cheap trick. I’d like them all to go and step over the line from time to time!

You are incredibly busy, mentoring, running courses, editing, organising events, acting as a poetry news conduit. When do you find time to actually write any poetry?

I do that with great difficulty, and oddly enough it’s hard to write on the boat – I tend to sit in the local library where I can work without distraction! Train journeys are also really useful – a first draft of a poem can be written quite quickly. Norman MacCaig said that you can write a poem in the time it takes to smoke a cigarette – I don’t smoke any more but I sometimes set the clock for 11 minutes and see what I can get in that time. It’s surprisingly successful!

Let’s return to the canals. How many have you visited so far since your appointment last year as canal laureate? What would you describe as your funniest / most disastrous/ most poetic moment on them?

I have been all over the place from Gargrave in Yorkshire, to Bristol floating harbour, and most points in between. Every waterway has its own character but really it’s a single system of connected links, rather than a collection of discrete places, so I see it as all part of the same great network. Every day brings its poetry – probably the most memorable moment was taking my boat under the great Severn Bridge as we travelled from Bristol towards Gloucester. But there are small pleasures too – this morning I opened my blinds to see a kingfisher flash past the window.

◄ Ringing the changes at Write Out Loud Middleton

What an interesting read this is. More power to your elbow, Jo.