National Poetry Day: going with the flow at the Southbank 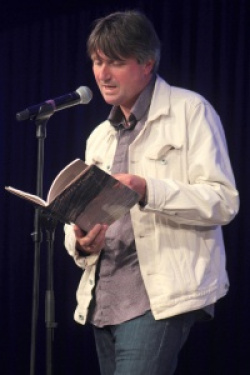 National Poetry Day may be over for another year, but the memory lingers on. For some, it may be the Prince of Wales reading Dylan Thomas.  For me it is of a splendid afternoon of live poetry compered by Joelle Taylor and John Hegley at London’s Southbank centre that featured, among others, Simon Armitage, Patience Agbabi, John Wedgwood Clarke, David Morley, Hannah Lowe, and Indigo Williams, all striving, wherever possible, to read something on the NPD theme of water, water, everywhere, as the Thames flowed past outside.

Armitage read some of his Stanza Stones poems –‘Rain,’ ‘Snow,’ ‘Mist’, and ‘The Beck’ - which have been engraved into rocks in Yorkshire. As he put it: “Water carved the landscape and gave us rheumatism,” adding: “After I’d written these poems it didn’t stop raining for about two and a half years. I should have written about sunshine, or money.” Continuing the Yorkshire theme, John Wedgwood Clarke delivered several poems about swimming in Scarborough’s South Bay, which he does regularly, from his pamphlet, Sea Swim. North-east coast locations feature prominently in his new, first collection, Ghost Pot, as well. Patience Agbabi had linking sonnets about the sea, and in particular, Chatham dockyards, as well as her Forward-shortlisted poem, ‘The Doll’s House’. David Morley was clearly moved by his sonnet sequence about his friendship with freshwater biologist Nicholas Hughes, the son of Ted Hughes and Sylvia Plath, who killed himself in 2009.

There were also hypnotic, compelling film-poems from Ian McMillan and Liz Berry, with film-maker Alastair Cook, and from Jo Bell, Ian Duhig, and Alice Oswald and Chana Dubinksi. The afternoon was rounded off with the satisfying harmonies of the Morris Folk Choir. During their five songs of the sea you could feel the flow, hear its swish. Greg Freeman