Smokestack champions the radical and unfashionable 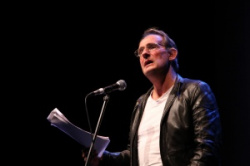 In the first of a series of Write Out Loud articles showcasing the work of publishers, Frances Spurrier interviews Andy Croft, pictured, editor of Middlesbrough-based Smokestack Books. Two of Smokestack's recent titles are featured in this year's Forward prizes. Steve Ely's Oswald's Book of Hours  is on the shortlist for the best first collection, and cartoonist Martin Rowson's limerick about Andrew Marvell, from The Limerickiad volume II,  is featured in the 2014 Forward Book of Poetry.

Smokestack “aims to hold open a space for what is left of the English radical poetic tradition in the 21st century”. It champions poets who are unfashionable, left-field or working a long way from the “metropolitan centres of cultural authority”. Smokestack is committed to the “common music of poetry; is interested in the world as well as in the word; believes that poetry is a part of and not apart from society; argues that if poetry does not belong to everybody, it is not poetry”.

What prompted you to start Smokestack?

I have been involved in community publishing projects on Teesside like Mudfog Press for many years. I have also written a good deal about the history of the British leftwing poetic tradition. Smokestack represents an attempt to combine these two concerns by publishing the best of the continuing radical poetic tradition on a regional, national and international stage.

What is the ethos of the press?

High-quality, attractively produced books of poetry that challenges in different ways the common-sense of our times.

It’s a challenging environment for small poetry presses at the moment, - apart from more public funding (unlikely, as there only ever seems to be less of that) how do you  feel it's best to encourage the poetry scene?

No one needs encouragement to write or read poetry. Humans were writing poetry a long time before written script was invented, never mind printing or public funding. The power of all art is still located in society, in the audience and not in the artist. The enemies of poetry are the white noise of dead language produced by big business, show business and careerism.

Do you think digital, paper publishing and performance are at odds or complementary?

A good reading will usually shift some books afterwards; every dull reading increases the isolation of poetry from our neighbours on this island. But on the whole the worlds of performance poetry, book publishing and electronic media are separate cultural worlds.

What do you love about being an editor?

Being able to put into print a book which I know no one else would ever publish, for example Steve Ely’s Oswald’s Book of Hours, which is now on the Forward shortlist for this year’s best first collection. We’re Going On! (the collected poems by Tom Wintringham, the first commander of the British battalion of the International Brigades in the Spanish civil war) and A Rose Loupt Oot (a collection of poems and songs about the Upper Clyde Shipbuilders work-in) would not have happened without Smokestack. I cannot think of another publisher would have brought out His Hands Were Gentle, a bilingual selection of lyrics by the great Chilean communist Victor Jara.

What do you hate about being an editor?

Turning down good MSS because I can’t afford to publish it or because I know I can’t do justice to it. Seeing good books ignored by reviewers. Watching review copies appear on Amazon or eBay the day after they are sent out. Bookshop returns. Amazon …

Would you like to say something about your current authors/lists?

Smokestack has a backlist of over 70 titles, including books by the great Bulgarian poet Nikola Vaptsarov, Francis Combes,  Andras Mezei, Gustavo Pereira. So far this year’s best-selling titles have been Your Call Keeps Us Awake by the Italian poet Rocco Scotellaro,  Kate Fox’s Fox Populi and If This Were Real by the distinguished Scottish actor Gerda Stevenson.  Next month sees the publication of The Tale of Walter the Pencil Man,  an anti-war verse-novel by Ian McMillan and cartoonist Tony Husband, and volume II of Martin Rowson’s The Limerickiad. Smokestack’s list for 2014 includes Martín Espada’s The Meaning of the Shovel, a book of poems about the murder of Lorca, Rob Hindle’s Yoke and Arrows, Tom Leonard’s translation of Mother Courage, a bilingual anthology of Greek poets writing about the Crisis, John Berger’s Collected Poems. This may look like an eccentric list, but I believe it represents the variety, political coherence and the intellectual distinction of the Smokestack project.

Background: The ups and downs of publishing

National Poetry Day: going with the flow at the Southbank ►

Excellent. what was it Adrian Mitchell said? Most people ignore most poetry because most poetry ignores most people. Good on you, Smokestack Books.

Thanks Guys. That's down to Andy who came up with great answers to my questions.

Ticks a few boxes for me too! Hmmm...might be sending a few off to these guys I reckon.

Left-field, championing the unfashionable? Well, I guess that ticks a couple of boxes for me. Thanks for this interesting interview with a publisher outside the metropolitan mainstream, Frances.