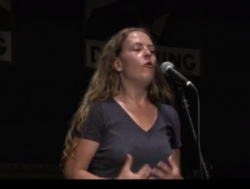 The tent was filled to bursting on Saturday (17 August) for the final  of the BBC’s annual poetry slam, which runs over a week at the Edinburgh Fringe. Competitors Rachel Amey, Sophia Walker, Rachel McCrum and Colin McGuire were welcomed by enthusiastic host Young Dawkins, and judges Fay Roberts, Kevin Cadwallander, Eleanor Livingstone and Callum Barnes.

The slick production, with flashing lights and stage above head level, made it feel very different from most poetry events I’ve attended, more usually taking place in a cosy bar or dingy basement café.  It still felt laid back, however, with the audience a key part of the proceedings, the  judges taking account of our claps and whoops.

Young perhaps spent a little too long explaining the befuddling scoring system, and the first 15 minutes of the show dragged as a result. Although some may have been interested, the audience didn’t really need to know in such detail how points were accumulated.  However, his evident love of spoken word and passion for slams was infectious; he commanded the whole event like an evangelical preacher.

In the first round each poet performed two poems. Rachel Amey did one personifying the NHS, warning of its destruction at the hands of the coalition government. She combined tight rhymes with a heartfelt belief in her subject matter. Sophia Walker’s powerful delivery of disturbing subject matter was incredibly affecting. In her first poem she drew on personal experience of aid work in Africa to conjure harrowing imagery and challenge the audience. Rachel McCrum’s style was much gentler and she delivered a richly descriptive, humorous first piece ‘Playing Badminton with Morrissey’. Colin McGuire had a completely contrasting style to the other performers; a deep voice and a loud, expressive personality.  His first poem wittily listed various types of belief about God, with comedic punch lines.

With 24 of the country’s top poets competing in the slam over the previous week it was no surprise that each finalist performed to an incredibly high standard.  Although I was clear which my favourite poems were, choosing who was the best would have been very difficult. The judges’ decision was made on three criteria: The quality of the poem, the quality of the performance and audience reaction.

Colin McGuire’s second poem was a tongue-in-cheek tirade against the dangers of internet pornography. He built the poem to a hilarious crescendo and used literary tricks, such as cleverly placed alliteration, to capture the sordidness of his subject matter, ‘glittering spasm of gizzum’. Sophia Walker’s second poem was equally powerful to her first. Projecting her verbs like physical punches into the audience she described her feelings at being called a dyke and beaten up for her sexuality.

For me these were the best performance of the night. The judges put through Sophia and Rachel McCrum into the final two and these two poets then went head to head with a final poem each before the winner, Sophia, was picked. Although Rachel’s poem about familial expectations in her native Ireland was brilliant and vey funny Sophia was definitely the deserving winner with another hard hitting poem drawn from real life experiences. ‘Jai came back from Afghanistan’, described the isolation of a soldier coming back from experiencing war, and the traumatic memories that he now carries with him.

The BBC Poetry slam showcased the talents of four brilliant writers and celebrated poetry in Edinburgh in general. At such a massive international festival it is a credit to the BBC that they invested in this large scale free event dedicated to spoken word.

Southbank poets pay tribute at 'I Have a Dream' anniversary ► 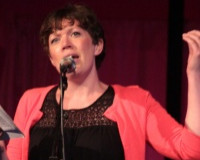 An interesting read - thank you. This does go to prove what I've always thought about slams and competitive poetry - humorous/witty poetry just doesn't stand a chance against serious stuff, no matter how well it's written or presented.

Personally, I like a poet who can show versatility - make em laugh as well as cry - but judges don't seem to - and audiences too when it comes to the crunch.

Thanks for this Lettie, great report. It sounds to have been a cracking final.