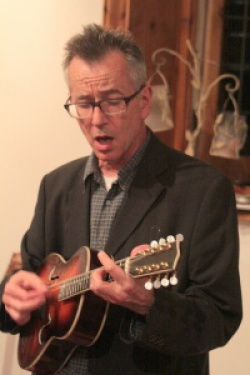 Words and Music in the Woods takes place in Queens Wood cafe, a  Swiss-chalet like structure nestling in Highgate Woods, north London. As two women poets waiting for the event to start agreed: “It’s like a fairytale.” I went for a walk in the woods and saw a fox scamper across in the early evening dusk in front of me, but thought better of it as my path dived into the gloom, not knowing where I was heading. With John Hegley topping the bill, the room was packed, with people sitting on tables, standing and blocking the doorway. With a packed lineup as well, genial compere Alan Wolfson might have felt the need to crack the whip. But an impressive set of open micers, almost all of them bringing forth something a little special, behaved with impeccable discipline and kept within time limits.

There is a strong element of music at this event. Among many enjoyable and able performers, musical comedian Cecilia Delatori, who will be appearing at Edinburgh this year, in particular caught the eye, blending the verbal dexterity of Victoria Wood and the facial expressions of Julie Walters with her own talent in hilarious songs such as Summer in Leystonstone. The Antipoet, fresh from Glastonbury, delivering “poetry for those who can’t be arsed to do it properly”, with their impatient, insistent rhythms fulfilled expectations with numbers such as Champion the Underdog and Everyone’s A Critic. Mel Jones, who with Alan Wolfson runs a separate event, Friggers of Speech, at Oddbins in Crouch End, was reliably filthy, including a well-received poem about bestiality using only words beginning with ‘m’. She and Wolfson are off to Edinburgh this summer, too.

Then along came “local and national treasure” John Hegley. Even he felt obliged to keep his set short, as he accompanied himself for the most part on the ukulele, encouraging enthusiastic audience participation with Always Carry A Plaster, a tribute to his old scoutmaster, and urging the crowd to explore our “inner guillemots” in I Am A Guillemot. The wine came in generous measures and was very cheap, too. As I tiptoed into the darkness, heading for the Northern line to take me back south of the river, the open micers were still hard at it, on a magical summer’s night.

It was a very lively night. You would have enjoyed it, David.

Brings the occasion to life beautifully.

We last listed 'Friggers of Speech' in March. Have messaged Mel Jones about listing.

Perhaps the fox can book a slot for next time...