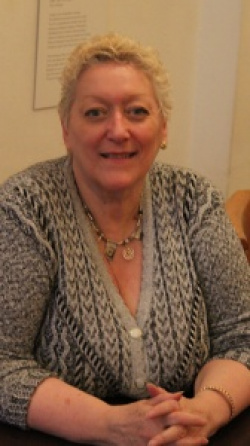 There were an estimated 50-60 women at Manchester’s Thomas Bar on 17 April, for a night hosted by Steph Pike, and featuring Rosie Garland and Rebecca Audra Smith.

Agnes Meadows, organiser of Loose Muse, is hoping to stage a second night in Manchester in September, to launch the new anthology there as well as in London. She said: “Anthology submissions are open to anyone who has attended a Loose Muse night. So all those who were at Loose Muse in Manchester in April are eligible to have a go.” You can do that either by emailing submissions to Agnes Meadows at agnespoet@googlemail.com, or by bringing your work to a Loose Muse event. The deadline is mid-July.

Eventually Agnes has hopes of establishing up to three Loose Muse nights in Manchester a year, and also talks of setting up branches in Cornwall and Norwich: “Who knows? It’s all about spreading the love. You could have the beginnings of a touring circuit.”

With the three poet laureates of England, Wales and Scotland all currently women, you might conclude that the gender battles have been won long ago. But Agnes has no truck with those who query why a poetry night has to be women-only, in this day and age, and points out that men are welcome to attend Loose Muse. They just can’t read or perform there, that’s all.

She firmly believes that Loose Muse is needed for many reasons. “Sometimes, as a new writer, if you’re not 25 and leggy, you might be quite apprehensive and nervous at facing a roomful of people where you don’t feel you’re going to be taken seriously.

I’ve always tried to provide a nurturing environment, where women can have a good laugh, support each other, where they don’t feel they have anything to prove or display – other than what talent they have.”

Agnes Meadows only started writing poetry at age 53. She was a journalist on the Walhamstow Guardian in her teens, worked as a freelance in Mexico after that, and later developed strong Middle East links, including living for a spell in Gaza. She has performed all over the world. Last year she was invited to appear at a festival in Babylon, “an amazing experience” during which she was interviewed three times by Iraqi TV. Loose Muse has welcomed visiting poets from Germany, Argentina, Australia, Sweden, Egypt, Syria and Jordan.

She is a member of the boards of Apples and Snakes, and the Poetry Book Society. She set up Loose Muse in 2004. Recently it has benefited from an Arts Council grant. As she pointed out earlier this year in an article in Write Out Loud, it is a cross-genre spoken word event.

She likes the idea of Loose Muse giving a leg up to people, by providing them with their first public gig, and the importance of encouragement, of telling them not to give up. “Very few of us are born geniuses. We all have to learn how to write, and to express ourselves better. You can’t judge people by their first few stumbling attempts.”

She talks of the feedback she has received from those published in Loose Muse anthologies. One wrote: “I was so thrilled. I was on the point of giving up writing, but your lovely letter has made me think I should carry on.” Another said: “You have given me the courage to continue. I thought I was crap, but you told me I wasn’t.”

At the end of our conversation in London’s Poetry Cafe she returns to Loose Muse’s women-only rule, after referring to Carol Ann Duffy, Gillian Clarke, and Liz Lochhead - the three matriarchs of English, Welsh and Scottish poetry, if you like. “People have the idea that it’s always been like that. I don’t think that’s true. There was the view that women wrote about babies, and cats. And the good, meaningful poetry was written by men.”

And then she adds fiercely: “I don’t see what the bloody problem is. How many other poetry gigs are there in London, that are open to men and women? If you want to read, go somewhere else.”

◄ Diana Gittins and the poetry of poultry

Net stretches across north at writers awards in Newcastle ►

Yes, there used to be notices to that effect in the "No Women Allowed" rooms of some of the rougher pubs round here 30 years ago.