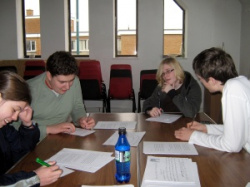 In October 2008, Academi was awarded a Beacon Company Award by the Arts Council of Wales which secured funding for the development of the Young People’s Writing Squads – a programme already well established across Wales. The Young People’s Writing Squads have been developed over the past decade by Academi in association with the local authorities in Wales. The squads aim to locate gifted writers in each authority region and introduce them to some of Wales’ leading writers and teachers of writing. Young People’s Writing Squads welcome children whose creative writing shows particular ability and promise. Usually this selection has been made by the age of 9 or 10, with head teachers in each authority identifying keen and gifted young writers.

Academi’s Chief Executive Peter Finch said: “Young People’s Writing Squads catch the best we have at an early age and engage them with the world of writing books. They are the future. They need all the encouragement we can give them.”

Since the announcement of the Beacon Company Award, five new Young People’s Writing Squads have been set up, three in Torfaen, one in Bridgend and one in Neath Port Talbot – the newest of the three which will meet for the first time this month. The Bridgend squad is currently working on writing a dramatic play with author Katherine Chandler, a stage and screen scriptwriter who has worked for the Sherman Theatre and the Youth Theatre. The Squad’s work will be developed into a theatrical performance by Bridgend Youth Theatre for this summer.

Katherine Chandler said: “This new Writing Squad is a great opportunity for young people living in Bridgend who are interested in Literature. Being able to work with a group of young actors has clearly shown to the squad how their work can develop from the page to performance.”

Three new Young People’s Writing Squads have been set up in Torfaen: two squads for children of school years 6-7 and one for children of comprehensive school age, ranging from school years 8-11. The Torfaen Squads’ first sessions were lead by writer Cat Weatherill, a successful performance storyteller and children’s author. She introduced the squads to the concept of creative writing, how writing should be structured, the language of stories and talked about where ideas come from. The next sessions will be led by writer Phil Carradice.

These new squads join Academi’s existing squads in Blaenau Gwent, Cardiff, Ceredigion, Denbigh, Gwynedd, Merthyr Tydfil, Monmouthshire, Newport, Pembrokeshire, Powys, Swansea and Vale of Glamorgan. The ACW Beacon Award will enable Academi to develop the writing squads further with the aim of establishing squads in every local authority working in both Welsh and English by the end of 2009. Academi also aims to set up writing squads working in other languages, especially in Urdu and Somali.

An ambitious new programme of activities for the Young People’s Writing Squads is currently being developed. Plans for 2009 include events at the Hay Festival, the National Eisteddfod in Bala, a collaborative project with the National Poet of Wales, Gillian Clarke and poetry film workshops in collaboration with writer Mererid Hopwood as part of an international Wales-India project, supported by Wales Arts International and the British Council Wales. A regular newsletter for squad members and organisers is also being developed, to bring the squads closer together and enable them to share information.

Members of Bridgend’s Young People’s Writing Squad had this to say about being part of a squad:

“Bridgend’s Young Writing Squad is great; I want to be the next Russell T Davies!”

“I didn’t realise that real writers do projects like this with young people, it’s really good to talk about my writing with Kath the tutor.”

“I want to act as well as write, so its good to understand how both work together.”

If you are interested in setting up a new Young People’s Writing Squad in your local authority region or want more information on how the squads operate and what they do, please visit www.academi.org or contact Elena Schmitz (Project Manager) elena@academi.org or Branwen Williams (Project Support Officer) branwen@academi.org