Competition closes in 19 days, 19 hours. Get details and Enter.

Sorrow and joy: a pilgrimage to the grave of Sylvia Plath 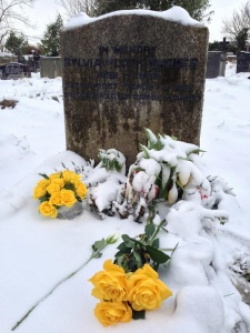 Arriving at Heptonstall is a reminder not to believe everything you read: in more than one Plath book Sylvia's grave is described as being located in a dark, damp valley, far from the sunshine she loved. In fact Heptonstall is high on a hill, and as close to the sky as you can reasonably be buried. It's 50 years today [11 February] since she died, and I've been planning the pilgrimage for a while. As a humanist, this is the closest I come to religious awe - visiting the graves and works of the great and good. I first met Sylvia's work when I was at school - an oppressive, strict Catholic school where my father was headmaster. A brave English teacher gave us Daddy to read, and I was rocked to my core. This is poetry? Words can do this? How can she speak to me so well?

Driving round the winding streets of Heptonstall, some cobbled, is a pleasure in itself - it's a beautiful Yorkshire village, and though Lancashire-raised I am able to appreciate it almost as it deserves. There's a large parking area, with a clear view of the hills, and we were helped to find the church by the peal of church bells. They rang in glorious cascades continually until just before our departure, marking this as a time of celebration as well as of mourning. Having set off from Manchester in coolish spring weather, it was a shock to find winter still in Heptonstall and its environs - thick snow icing everything, including the graveyard.

It's a plainish graveyard, nothing remarkable. I was accompanied by my publisher, a rangy Ted Hughes type, and was a little worried that he'd get stoned if there was a crowd there. We slipped and tripped through snow and slush, trying to find the grave - the internet had given us descriptions, but they were by no means easy to follow.

Two women in black were walking across the other side of the graveyard, holding a bouquet.

"Look! Yellow roses!" I hissed. "They're here for Sylvia too!"

I was clutching a similar bunch. Aurelia Plath, her mother, said that they were Sylvia's favourite flower.

"Let's follow them," said my publisher, and we made our way rather apologetically towards them. Thankfully, they were here for the same reason as us - to mourn Sylvia and express their love for her. We smiled at each other, talked a little, and then laid our flowers on the grave.

I had been warned that there might be litter, and had brought a bag in case there was cleaning up to do, but it was absolutely spotless. The only thing I wish I'd brought was something to clean the actual headstone, but hopefully one of the other pilgrims will bring that. The headstone stands, very plain, giving her name (including the 'Hughes' at which so many of us sigh), and a quote chosen by her estranged husband, Ted Hughes: “Even amidst fierce flames the golden lotus can be planted.” . This quote has been attributed to various Buddhist and Hindu works, but appears to be a misquotation - nowhere is it found in this form. The grave itself is simple and unadorned.

The Women in Black (one was called Alex, and lived locally; the other explained that her mother had grown up in the same part of America as Sylvia, and was the same age) had brought a candle in a jar, with a lovely picture of Sylvia attached, and lit it. We all took photos, and they took photos for us and we took photos for them, and it felt entirely appropriate to meet with friendly strangers at Sylvia's grave.

At this point I burst into tears. It was my first visit, and I was very emotional. I have loved Sylvia and her work, and her diaries and letters too, for over 30 years.

"It's so cold, and she hated the cold," I sobbed, remembering her short story The Blitz, about the attitude of British people to winter. "She needs blankets - but she's dead ..."

Ridiculous really, but then grief does that. Everyone was sympathetic.

Alex and her friend left us alone by the grave for a while, as it was our first time, and we stood there in silence. Against the dark granite headstone and the white snow, the yellow roses and the blue candle, flickering bravely, looked wonderful. The sun came out and bathed the grave, and the others with it (Sylvia is between a Horace Draper and a John Henry Redmond), and my spirits rose.

Some see Plath worship as something one grows out of, something immature. This is often just the usual stigma against mental illness, or spoken thoughtlessly by people who only know a few of her poems; but the richness and fullness and roundness of her work are fully appreciated by many people, thankfully. The “circus” of Plath discussions in the media is also criticised - academics rattling sabres at each other, and everyone claiming Plath as their particular property - relatives, feminists, anti-feminists, Hughesists. It isn't a circus. We care about her, and she still inspires us to great emotion, and there is still much to be said and thought about her. No one owns her memory, and we all have a right to our feelings and beliefs and our expression of them.

We left the graveside with it looking lovely, bathed in sunlight, and picked our way carefully back to the car. As we drove out of Heptonstall we saw others making their way gravewards in small groups, heads down against the cold. But the sun was starting to blaze, and I was left full of joy as well as sorrow.

Plath's contemporaries said she felt an alien in West Yorkshire. The question to ask is whether Sylvia Plath herself would want to lie there. One feels the answer is no.

Heptonstall like Haworth is an oppressive place. The land doesn't want people there.
She should not have been left to whiten her bones in what is basically, a field.
Even then it looked like an act of anger rather than an act of love.

Her remains should have have been returned to the United States years ago and reburied close to her parents.
Hughes and the Hughes Estate have made money from her bones whilst neglecting her grave.
It is an unforgivable disgrace.

For awhile both Plath and Hughes gave each other the image of their own mind.
Plath must have been aware of Emily Dickinson's line... The poet marries herself.

It is possible that Plath might have taken her own life even if she had never met Hughes. It is tragic that she met a man who betrayed every woman with whom he had a relationship.

The truth is lost on the way to the cemetery.

Thanks all for your kind words.

A poignant piece, Cathy - thank you. I was very moved when I sought out Sylvia's grave while I was on a writing course at the nearby Arvon centre, Lumb Bank, in 2011.

Thank you for sharing, Cathy. Amidst all the media circus around her anniversary, it is lovely to read such a heartfelt article.

A lovely Article Cathy. Go up there often as I live down the hill. Looks so different in the changing weather conditions. But in your photo it shines. Nice x

A lovely, fitting piece Cathy.
If anyone else goes up there you might also want to search for the nearby grave of another, far-lesser-known American poet, Asa Benveniste, who lived in Hebden Bridge and whose headstone bears the words: foolish enough to have been a poet.

This article is so moving. It's so heartwarming to read. Sylvia and her poetry mean so much to so many people. Thanks for sharing Cathy.

I realise that many people find her work too inward looking or inaccessible but I think her passion and emotion makes her work unforgettable whether you can empathise or not. It's motivated me to go there myself. In her death follwing her conflicts and "furies" she still brings life and inspiration for me to push on, even while experiencing those creative "lows". Thanks for sharing this article, really enjoyed it.

Today's snow and ice a poignant reminder of that long, hard winter of 1963. Thank you very much for this, Cathy.