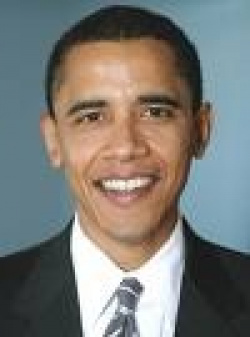 The two poems are sent to mark the inauguration of the 44th President of the United States on Tuesday 20 January. Barack Obama will be the first African American to hold this office. Gillian Clarke, of Talgarreg, Ceredigion, was “delighted” to be commissioned by Academi to write a poem in honour of the historic occasion.

Gillian Clarke’s work is read and enjoyed by thousands around the world. Her work is studied in schools across the UK as part of the English Literature course and from November 2008 to February 2009 she will have performed her work in front of over 100,000 schoolchildren as part of the highly successful Poetry Live! events. In February she will read and discuss her work with 900 English literature students in Dubai.


Here's the English version of the poem

Venus in the arc of the young moon

is a boat the arms of a bay,

the sky clear to infinity

but for the trailing gossamer

of a transatlantic plane.

The old year and the old era dead,

pushed burning out to sea

bearing the bones of heroes, tyrants,

in a smoke of burning money.

The dream is over. Glaciers will melt.

Somewhere a volcano may whelm a city,

a hurricane topple a town to rubble.

Yet tonight, under the cold beauty

of the moon and Venus, something like hope begins,

as if times can turn, the world change course,

as if truth can speak, good men come to power,

and words have meaning again.

won’t blow themselves and us to smithereens.

cease slaughtering the weak, the rich

will not gorge as the poor starve.

and a thousand British teenagers at Poetry Live[1]

rose to their feet in a single yell of joy ?"

faithful and faithless. We are all in this together.

[1] A day of poetry readings for school students