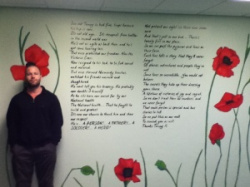 Ward 34
See old Tommy in bed five, limps because his hip’s sore
Its not old age….. Its shrapnel, from fights in the second world war
He’s not as agile as back then and he’s got some hearing loss
But once protected our freedom…….. Won the Victoria Cross.
Now resigned to his bed, to be fed cared and watered
But once stormed Normandy beaches, watched his friends maimed and slaughtered
He wont tell you his bravery, He probably now doubts it himself
As he sits here now cared for by our National health
The National health……….. That he fought to build and protect
Its now our chance to thank him and show our respect
He’s………. A PERSON!…. A FATHER!….. A SOLDIER!….. A HERO!
Not patient one eight six three nine seven zero
And that’s just in one bed….There’s twenty five in our place
So we see past the pyjamas and lines on their face
You see each line tells a story, that they’ll never forget
Of places, adventures and people they’ve met
Some lives so incredible, You just would not believe
The secrets they hide up their dressing gown sleeve
A lifetime of victories of joy and regret
So we don’t treat them as numbers, and we never forget
That each person is special and has stories to tell
So we put this on our wall
To remind you as well.
Thanks Tommy X
Ged Thompson (Liverpool Poet)
Dedicated to all the heroes/ heroines on Ward 34 (Staff included)
Legal Note: Poem remains property of Poet, permission has been given one time only to have this painted on the wall of ward 34 In Fazakerly Hospital in Liverpool and should not be altered, reproduced or edited in any way without the Poets consent.
Personal note: Sorry folks had to add that an unscrupulios Art Director for Aintree hospitals for some reason hadthe oem painted on the wall but removed the title, note of dedication and the poets name.  Really bad form I knoww but when I looked at it I realised why.  This makes the poem generic, personally I would love to see this painted on every hospital wardin the world as it has a nice sentiment and encourages peole to see past  age and illness and show due respect.  However I really dont like the thought of this womans company making a lot of money out of it and paying the nurses of the ward it was written for no respect.  The essence of the Poem is a true story about a real patient, the nurses wrote the poem by telling me the story of the man, I only conveyed it into words and poetry.
Ged

Thankyou, both of you. You're very right Isobel but to the degree that Poets dont make any money from poetry. What we have in this case is someone who works for the NHS but has there fingers in others pies ie working privately selling art and ideas to other hospitals/ establishments and also having a hand (complete control) in who gets awarded the contracts to have work such as this installed in such places.

Now if such a person would use this control to edit a poets work in the fashion that they would remove the Title, Note of dedication and Poets name. It would indicate that they may have a motive for this rather than it just being really bad artistic etiquette and border line disrespectful to both the myself and the nurses.

That aside this issue was only foot note Its about the work itself.

I think the subject of your poem would understand why you should be so determined to protect what you value! Good for you - and for "Tommy"!!

I don't think many people make money out of poetry Ged - but I can understand how you would find the omission of your dedication upsetting.

It's good to remember those who made sacrifices on our behalf. I'm glad such war poetry is still written.