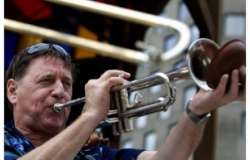 The war was all around

And the city was small.

The doctors laughed at him,

Well, may be the trumpeter?

OK, trumpeter, as a trumpeter!

Being a trumpeter is so good,

At least you don’t have to bow.

The bullets whistle over your head,

As the winds sometimes blow.

For a boy the war was a spit.

But once in the autumn rains,

In a strange unknown land,

The regiment was waned,

No one heard the command.

No one was there to be astound.

Come on, trumpeter! You sound!

In smoke and flames he stood,

His lips pressed to the trumpet,

The International they sang,

And the triumph bells rang.

The trumpeter,.. but a real soldier

Was devoted to a peaceful music,

He had to defend the border,

With a trumpet to do the trick.

If you are a man but not a hick,

The trumpet you will pick.

I've posted here the picture of my friend from Canada Roger Walls.

He plays jazz, classical music and...he is the great musician.

◄ How Many Questions Our Life Arise?