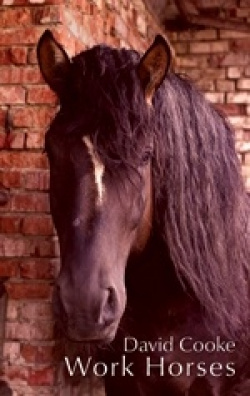 David Cooke won acclaim with a Gregory award in his youth, before decades of immersion in teaching almost extinguished his poetry. He left education to set up as an online bookseller, and the poems sparked into life again. First came last year’s retrospective collection, In The Distance, and now 2012’s Work Horses, the latter encompassing a “dreamtime” childhood in the home counties; Russia and Sri Lanka; and family and his roots in Ireland.

In the first poem in the collection, Stereogram, he refers ruefully to Bob Dylan’s  “late renewal after wasted years”, and to the cover of Dylan’s first album in the early 60s: “dressed like a vaudeville hobo … We had all our lives before us.”

But Cooke is not looking back in anger, although there is the odd note of regret within the measured, consistent tone of these poems. He recalls a brand-new bike to celebrate arrival at Grammar School, which was never the same again after a run-in with a lorry, its salvaged parts grafted on “to a botched-up frame”. Cycling uphill on this patched-up hulk,

One of the collection’s themes is that of resilience, reflected in affectionate poems about his father, an Irishman who sought work in England where he could find it, and became a self-made man who knew about Money, a poem that recalls Macmillan and Wilson and their 50s and 60s catchphrases. However, Cooke’s father

to tell him more half-truths

about his pound in his pocket.”

There are other 1960s references. Annus Mirabilis, focusing on 1963, a year also noted for its significance by Philip Larkin and Paul Farley, is chock-full of them – the Beatles, Big Freeze, Profumo affair, and a death:

“we were all together watching the news,

when a sniper’s bullet

brought my mother to her knees.”

Cooke’s relationship with his father is more closely examined in Shadow Boxing:

“The closest my dad every got to poetry

was when he savoured some word

he sensed in bob and weave”

He concedes that his father would have liked his son to have been a boxer, convinced that he had it in him. But the poet hopes that his dad still admired his skill at sparring with words:

“In the gym it’s after hours.

The lights are low. I’m on my own

him feints, a classic stance,

trying always to keep up my guard.”

This is moving: most of us want to impress and reward our parents. In a benevolent poem Cooke examines the archaism of words like “courtship” and “cordial”, with the music of the poem reflected in the final couplet:

“His favourite I’ll Walk Beside You,

loved for its melody and because it was true.”

(Songs He Sang Her)

This sense of family and its enduring strength permeates throughout, from the grandfather who interrupts his childhood carefree roaming around the Irish countryside with tales of “swally holes” … “a nothingness opening up”  (Down), to Cooke’s own abandoned Catholicism, which he compares with his daughter’s new faith:

“You have seen light shining,

where I must shape my own less certain code.”

(On My Daughter’s Conversion to Islam)

Cooke is a linguist, interested in language wherever he goes: Irish, Sinhalese , even Manx. And the travels of his offspring help him look beyond the home counties and Ireland, to Russia, where a poem about Moscow is dedicated to his eldest son’s wife; and Sri Lanka, where his daughter is about to embark on an Islamic wedding. The Russian poems attempt to delve beyond the guidebook surface; there is sense of history, of trying to take stock of the new Russia, with St Petersburg loudhailers

and not proclaiming some new invasion”

in a city and country where

of lithe cars and labels.”

(The Peter and Paul Fortress)

sustained by profit and a few good intentions”

and how the strict, imperial geometry of the gardens mirrors the discipline of young couples obeying the rules of betrothal - as his daughter does, too. Yet the original rigour of the gardens now includes a degree of anarchy, in a country still coming to terms with its colonial past, a traumatic civil war, and its aftermath:

propped, the sprawling system of its roots exposed,

had risen up in chaos from its central lawn.”

“go unfussed about their business”

There is a facility to the rhythm and cadence of his poetry that may lure the reader into a belief that its meaning and message are accessible at first glance. In fact, Cooke’s poems invariably repay re-reading, to appreciate what resonates beneath. The poems strike particular chords with this reviewer, because of Cooke’s age and 1960s references, background, and the clarity, cadence, and unfussy craftsmanship of his work. But these poems of childhood, family, emigration and relocation are not confined within any geographic or demographic boundary; they reach out across the generations.  Greg Freeman

Make it your day, on the advent poetry calendar ►

As you say Greg, familiar themes, a ready identification, and a style of autobioographical poetic story telling we of a certain age are comfortable with. Amazing how a phrase or sentence carries a whole page or chapter of meaning.

Cheers, Steve. An added interest for me was coming across several poems in the collection that David has tried out in the past on the Write Out Loud blogs.