All the way from Kathmandu - Selected Jazz Poems: John Clarke 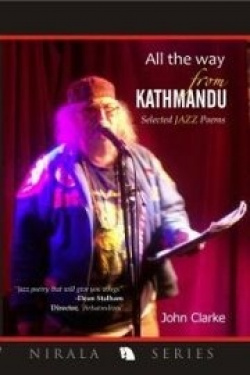 I once saw John Clarke perform in Greenwich. He represents an exotic minority of performance poets who conceive their poems in a mindset earthed in jazz and blues. The poems are not lyrics in a conventional sense; but, like many lyrics, standing bare on the page, they don’t shine as they might. As for what a jazz poem is, I presume it to be one enhanced by or created for a jazz score, in a way that the two are complemented. In that sense the collection could be seen as the sound of one hand clapping.

After three attempts at skimming through All the way from Kathmandu I knew I was missing something. I dug out Clarke’s 2009 CD What Jazz Can Do (for your life) performed with the imperious Jazz Circus, and the pieces began to fall into place. One track from that CD is included in the collection, Bluebird.

John Clarke can be profligate with his words, doesn’t mind the odd mixed metaphor and non-sequitur, and is driven by his imagination. He is not a page poet. He is not clinical or pedantic in pursuit of form or structure. However, with Jazz Circus providing the sound track I re-read this collection, with his south-east London voice in mind, and heard it afresh.

As someone who favours the literal and observable I was drawn to Clarke’s reflections on life in London such as Loop:

Scraping humanity off the floor

Sometimes we don’t even seem capable

Of doing even that”

In The Reach he rails at the newcomers to his patch “who bought luxury flats during the last property boom in this semi-ravaged area”. They will never know “what saves this area from the damnation of destruction or what redeems it from the ice pick of redemption”.

He’s not all angry. Humour abounds, albeit sometimes dark. One Night Stand tells of a pre-Christmas fling which finishes with the owner of the big chunky jumper saying “Santa I want it All”, and slitting her wrists.

“Christ what a godawful

In a similar Christmas party vein he is ministered to by Four Angels Of The Apocalypse At Seven Sisters who appeared :

“They schucked my cheeks and tucked me in

Tugged my ears & pulled on my chin

John Clarke is on that spectrum of beat to acid; poetry which is urban, irreverent, challenging, edgy, iconoclastic, surrealistic and wildly imaginative. He references the founding fathers, Ginsberg, Kerouac, Burroughs. But he has done his time in commercial banking and has the insider’s edge in targeting the obvious icons of that world.

“I simply love it when Oxbridge-types promise so much

Only to achieve so perishing little.

I come from the camp that smokes them out”

Like all good beat poets he has developed his interests in Buddhism and therefore at times ascribes little importance to the trivia of everyday life, as in Dharma Magic:

Because nothing has value

And therefore nothing dictates

To my being during

My daily hourly flow from existence”

Or in The Vast Eternity Of Now:

I am the controller of my fate

I am a river in full spate”

How often have we felt that on leaving our meditation class, only to fall at the first pub. Perhaps to compensate and recognise his own frailty as a truly free agent he admits :

“I go round picking up banana skins in case I slip

I’m busy rehearsing the silence for a film

I will never make”

His surrealism informs any number of contributions, delivering lines such as

“You are sawdust of guitars grinding away

In a blood-spattered butchers

You are cargo of left over ideas scorching endless horizons”

(The Acrobat and the Gypsy)

“The tattooed lady is dancing with the witchdoctor

The tripe butcher licking his lips is sipping champagne

From the ballerina’s slipper

The tired politician is slumped by the roadside

Waiting for the sky to disappear

Well, we thought Lucy in the Sky with Diamonds was great. I started by saying John Clarke is not a page poet. I’m wrong. Most of the message of a performance piece has to be communicated during that piece, a good argument for repetition and audience involvement. Most of these poems are not of that ilk. The shorter love poems (Voicemail, Poems, How I get to know you) may be direct enough to get in one hit. Others require some decoding but no doubt still sound good against the driving beat of a tight jazz combo. (Forgive me for sounding like John Thompson).

There are poems in this collection that don’t work for me. List poems such as Options Various  and How Art Interferes with People’s Daily Lives are fun but run out of steam too soon. Others may love them. John Clarke is a confident wordsmith; his cosmic inclinations notwithstanding, he writes sensitively and directly of relationships and of his own journey as an artist. He has the confidence of a man who has come through relatively unscathed, older, wiser, stronger. As he says in Poem Written In An Almighty Rush:

“I have conversed with beauty regularly

And given it a good run for its money”.

◄ Poets read in aid of the homeless at Camden

thanks Kealan, glad you liked it. Blues and Haikus was first released in 1959 and actually features saxophonists Al Cohn and Zoot Sims ("his favourite tenorman"). Al Cohn did play piano on a couple of tracks. Poetry for the Beat Generation, released earlier in 1959 featured Steve Allen on piano, a session conducted without rehearsal in one take. Allen, a popular entertainer and TV personality, skimmed through each manuscript,then played. Kerouac followed. Both say a lot about JK's love of the jazz idiom. I read that Cohn and Sims left the session without hearing it back which greatly upset him.

this was a good read, i downloaded a cd awhile ago with jack kerouac reading bits and pieces with a jazz piano in the background. really beautiful, 'blues and haikus' i think it was called or that might be another one, worth looking up anyway.