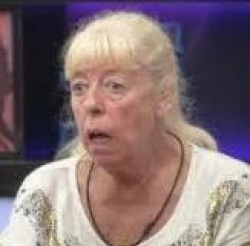 I do hope Julie Goodyear isn’t voted off Celebrity Big Brother. Without her the show would not be worth watching.

I fear she may be voted off, however, not least because most of the people who ring the Channel 5 phonelines are … well … young and a bit thick.

Sorry if that seems cruel, but the type of people who regard the rapper MC Harvey and the US actor ‘The Situation’ as celebrities - or even remotely interesting – must be dim.

The Situation is a former underwear model who was in the axed and very crap reality show Jersey Shore. Yes, he’s that tacky, folks.

Julie Goodyear, however, is a tough old bird who really does have a very strong personality – a megastar of Coronation Street as the brassy barmaid Bet Lynch with her famous catchphrase, “What can I do for you, cock?”

I once met Julie, as it happens, when she was starring in some camp nonsense of a stage show in York, and I was a columnist for the Hull Daily Mail. I think it was in 2002, somewhere around that time.

She was due to appear in the same show in Hull a few weeks later, hence I was sent to interview here for my weekly Out To Lunch column – which had a cult following in the city’s evening paper.

It was my duty in those days to take a celeb out to lunch at a restaurant each week and ask them a few questions while getting sloshed on expenses (me getting sloshed, usually, not the guests; they knew they had to stay sober and on their mettle).

Naturally, I researched each interviewee first. Among the cuttings on La Goodyear was an interview she’d done with a Fleet St columnist who had written that our Julie had “more facial hair than all of The Dubliners together”. Miaow!

Julie does have a bit of a face fuzz problem, as it happens, but it would be ungallant of me to dwell on that.

Anyway, during my interview with her, she didn’t want any lunch. It was all done in the theatre dressing room, with the actress (and she is, actually, quite a good actress) smoking from her trademark cigarette holder and giving arch replies to my questions.

One question – and it is, unfortunately, one that provincial journalists are expected to ask of a star about to visit their local patch – was: “So are you looking forward to coming to Hull, Julie?”

Hmmmm... She chose not to reply verbally; she merely gave me a horrified look. Time spent in Hull ….definitly NOT something anyone in their right mind would look forward to. That was the meaning of her look.

I was tempted to say, at that point, “Oh, come on Julie. Hull’s not THAT bad. I find it easy enough to endure if I keep myself topped up with booze” but thought better of it.

Anyway, Julie’s an old pro, so she gave me some decent catty and camp quotes for the interview. I remember the paper ran it as a spread (across two pages) with the strapline ‘The King of Hull meets the Queen of the Street’.

I should explain that, at the time, I was billed as the ‘King of Hull’ for my critiques of the city and its incompetent Labour rulers in the column, which appeared in the paper three nights each week. Happy days.

Anyway, back to Celeb Big Brother. I think Goodyear's been the star of it – with her two-faced moaning, that episode of genuine kindness with a sobbing Martin Kemp, and for her constant use of “F**k off” and “Piss off”.

Also, I think the show deserves a big pat on the back for its positive promotion of SMOKING!

Virtually, all the BB residents smoke. Good! Two fingers to the many health fascists in Government and the medical profession who are trying to stamp out smoking altogether.

Smoking has many positive aspects – it boosts social inclusion and relieves stress, for example.

No-one is pretending that smoking is actually healthy, of course, but the ban on smoking in pubs, restaurants and workplaces is most definitely evil – an act of tyranny.

After all, what is the point of being healthy, if you are not free?

If I remember, I will put my money where my big gob is – and vote for Julie to stay in the BB house.

Sept). If you've not been to the Bards before, well, it's fast-paced, which means that EVERYONE (who wants to) gets TWO performance slots of 4 minutes each. So it's like everyone's a guest poet! Starts 8pm. No admission charge, and no set lists - we read in the round.

Usually, I compère the earlier part of the evening, but I can't this time because I have to be in Oxford for a conference. However the very witty Jason T Richardson has kindly agreed to fill my MC’s slot (fnnnaaarr!) and he will be helped by regular co-host David Costello. Enjoy. Sorry I can't be there, folks I might send a hologram of myself to read my new poem, 'The Silencing of Mary Poppins'.

THE BARDS ... they're all talking about us!

◄ Roll out the red carpets!

Ar hey, as they say in Liverpool, she's been voted out by the dumb-ass viewers.