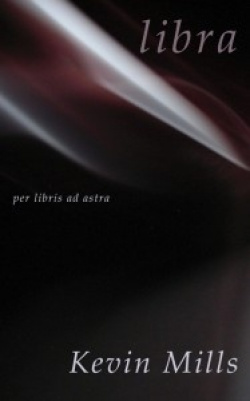 I've read many books from this publisher, and this one further confirms my feeling that the editorial policy claims of Cinnamon to being “independent”, “innovative”, and international' are not without foundation – if for “independent” we read “eccentric”, then this is certainly true. In a number of ways Kevin Mills is certainly not attempting to occupy the middle ground of contemporary poetry.

Immediately following the acknowledgements and biography is a glossary that tells us – among other things – that “armilla is part of an astrolabe – a component of the suspension mechanism”. This may or may not help, depending on how deeply the reader is prepared to go into the subject of the astrolabe and its many uses. But we do need to know this and other things in order to have a chance as lay readers of making sense of a number of these dense, allusive and hermetic poems.

Apart from not having much idea of what is going on at times, there are the eccentric choices the poet has made in lineation and layout of some poems.  Revelation is about the founder of the Mormon Church and the angel who revealed the whereabouts of inscribed plates about the new religion:

below the surface of

when it rains I

ters on the dampening

As a book for reading aloud this one does seem problematic. I found it hard at first to respond positively to it. However, though there are some irritations to be experienced,  there is also a good deal to be enjoyed. And coming back to it after several weeks I discovered that, though the irritations still exist for me, there is much more here to enjoy than I initially found.  Any book with a poem entitled Three Sybils that has this as one of its parts can't be anything but worthwhile:

I gave up counting grains

of sand when I realised

that the pain in my fingers

was arthritis.  The poet

will revolve in the face of the

moon, your voice through

a thousand years.  Fuck you

Finally, on one of my many returns to the book, there is this concluding part of the sequence Byzantine, which nods of course to Yeats, but takes a quite different approach:

his knuckles.  Some poet, let's imagine, far out-

sold by ephemeral icons, may know – though

darkly – how to accept

it, having learnt the cause.

This poem also contains a section, Royal Bank of Byzantium, where we are told that they “... invested far too much in the invisible, as if angels underwrote the loss”.

A better advertisement for the virtues of patience and perseverance than this book would be difficult to find. Ross Kightly

It all knits together at St Ives festival ►