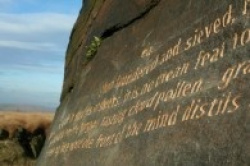 Simon Armitage's poems hand carved into Pennine rocks form the outcome of Ilkley Literature Festival’s Stanza Stones poetry project, which launched in style in the Pennine watershed town of Marsden - home to a Write Out Loud poetry night - with an evening of poetry, dance and film. The session began with Simon reading his specially-commissioned sequence of poems on the theme of ‘water’ in all its states, each giving the title to a poem: Rain, Mist, Snow, Dew, Beck and Puddle.

Each was chipped into a rock at intervals along a 47-mile permanent ‘Poetry Trail’ on the Pennine watershed between Marsden and the festival’s base in Ilkley. Simon's candid account of how he created the poems makes fascinating reading.

At this launch session in a packed Marsden Mechanics Institute, the poet mused on the potential life of his ‘rock’ poetry, its dialogue with the stars and what visiting aliens might make of it in some post-earthling future. He thinks of the project as “giving poetry back to the landscape".

Water is what Marsden does best, its greatest export (apart from the poet himself). A high rainfall supplies the town’s abundant reservoirs via the peat Pennines’ permanently percolating streams, before shipping it out along the river Colne, the Huddersfield Narrow Canal and some pipes. This being where Armitage grew up, who better placed to write about the stuff?

The audience was also treated to a cocktail of cultural creations from the project’s youth engagement element in which young writers, dancers and filmmakers interpreted Simon’s and their own poems. We had a fascinating film documentary about the project’s progress followed by superb, and superbly read, poems from Calderdale Young writers, Longley School students and Sheffield Young Writers, with dance interpretations by youngsters from RJC Dance. Then Manasamitra brought their atmospheric Indian music and highly percussive dance interpretations of Simon’s poems. Not my cup of tea, dance. Or so I thought. This was a fabulous, accessible blend that was part dance, part mime.

To have all this in a town/village of but 4,700 souls is amazing. The project is a real credit to its team, led by festival director, Rachel Feldberg. For Simon Armitage also we got the impression that this was more than just another project, rather a once-in-a-lifetime opportunity. To have grown up amid the stark beauty of these hills and be able to leave your words carved on them, legitimately, must be an astonishing privilege, one he seems to have handsomely repaid, not just in the stunning stanzas, but also in his contribution to his clearly successful work with the young people in creating something with potentially lasting impact. Appropriate, because that is the aim of the Cultural Olympiad of which this is a part.

Further Stanza Stones celebrations include a series of guided walks at Oxenhope and Ilkley in June. More details from info@ilkleyliteraturefestival.org.uk.

◄ 'Giving something back to the landscape, whether it wanted it or not' - Simon Armitage on the Stanza Stones 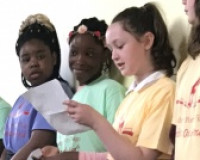 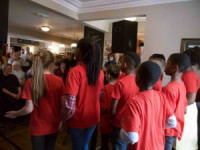 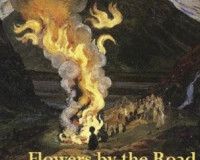 Wow, thanks Ann. Any more rock poetry, anyone? How about rock with poetry written right through it, like Blackpool?

Here in Cornwall there has been considerable regeneration going on in the Redruth area and Bob Deveraux (who is a fab person and poet and runs the May & September St Ives Festivals) has some of his poems carved into rocks on the site. There is a website about Heartlands but it seems to be down at the moment :( So I've just pinched the following from Bob's info site.

"Heartlands
Heartlands is a new visitor attraction developed on land that was once part of the tin mining industry in West Cornwall. Now part of the “Cornish Mining Landscape World Heritage Site”, mine buildings have been restored and developed into art exhibition space and gardens have been designed to tell the story of Cornish emigrants around the world. A poem by Bob about these emigrants (the “Cornish Diaspora”) is carved into
12 granite boulders that form a work by David Mackie entitled “Seams and Veins”."

Good review, Julian. I would have loved being there also. Personal poetry carved in stones where the poet grew up is a thrilling idea; Mr Armitage must feel almost 'spiritual' about the whole concept - maybe his words will be a future 'link' to decipher an ancient Earth language.

Addendum to the review:
Pip Hall was the plucky stonemason responsible for carving the words on the Pennine gritstones. The 'Beck' poem was carved on a boulder in the middle of a... well, a beck, or stream. At least, it was a stream when they did the survey. When she came to carve it the stream was in flood and poor Pip ended up working by standing in a waterfall for days on end.
I should also mention that the photo is: Rain at Cow's Mouth Quarry, Littleborough. © Pip Hall. Reproduced with permission.

Really enjoyed this account, Julian. Made me wish I could have been there.