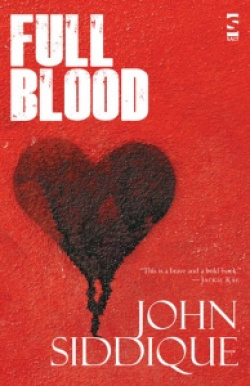 One is reminded at times, in reading Full Blood, published by Salt, that a poet can have multiple voices – and that some styles within a single poet’s oeuvre can work very differently than others. John Siddique is a gifted writer of tremendous range, and within Full Blood’s 105 pages of poetry that there is really more than one book. One is impressed by a startling display of variety, but this reviewer was also left feeling slightly frustrated.

Siddique is a war poet, a travel poet, a relationship poet, an erotic poet, a race relations poet, a philosopher-poet, a myth-making poet, a nature poet, an urban poet, a character-portrait-poet, a social commentator-poet; and he also employs a variety of poetics to explore those many roles. If  Siddique had trimmed this generous volume down to a more traditional and frugal 40 or 50 pages, there would be a more astonishing book here. The blurb on the back cover says: “This is… poetry at its most radical, lyrical and affecting” but in the end you can’t help feeling that what is radical, lyrical or affecting about the book has been diluted somewhat by its very generosity.

Siddique’s work seems strongest as poetry documenting urban discontent, combining an empathy for wider society with an interest in the individual story. The book begins to take life about 15 pages in, with a series of short story-like portraits: the animalistic prostitute in Love Poem, “a tiger under streetlights”, or Mary “the screaming woman at Venice Beach … / …yelling at the big cars… / making tai-chi movements with her arms”. In both cases Siddique is giving a voice to the tales of unhappiness or unease on the margins or in the underbelly of society. Similarly there is a memorable poem about a woman  who brings her car to a halt in traffic without apparent reason, confronted by the crowd (One Monday Afternoon in Mytholmroyd); there is the girl in Rachel Last Springtime who is described as she “watches the couple / they make in the dining room window”, capturing the mixture of voyeurism, longing and disappointment. In urban stories like these, with their bus stations, taxi ranks and shopping centres, Siddique’s writing feels most vital – as if he has been invigorated by the community subject or by thinking in character. There is greater rhythm and concision and a strong, simple sense of music in the lines when he writes about society, or the individuals within it:

“Music of bugles, silence of prayers

a beautiful warm day across these States…

The sun ascends to fall over the years

which march forward in dignified rows,

peace by peace, ending by ending.”

Siddique cares for the stories and connections among communities and between generations, and writes with an attention to both the individual and the greater crowd, and the responsibilities between the two. Into this category of stronger work one can also place the poems set in Afghanistan, which are mostly affecting and assured, either as travel poems describing a culture or memorials describing conflict. A focus on concrete descriptions, as in his urban stories, conjures a culture vividly:

“Camels camp next to apartment blocks.

their engines. A Pashtun boy with the face

of a goddess, eyes lined with kohl, and a smile

for the eye of the heart.”

Elsewhere, however, Siddique’s writing is more philosophical or idea-based, and for this reviewer this style works less well. An inclination to wield abstractions combines with a looseness of rhythm and use of vaguer language to make his music feel more amorphous:

“Each of us changes when placed next to the other.

We place ourselves, or are placed or paired creating

With love comes the desire to be seen for who we are.

From juxtaposition comes the marriage of existence.

Arranging ourselves as an exhibition of human things.”

At times the use of words in his more philosophical writing needs to add up to more than it does in the space that it takes:

“Each of us choosing and chasing

the reflections that suited the feeling.

We could not be other than we were”

At other times, Siddique employs a wholly jubilant voice which feels at odds with the sharper social critiques elsewhere in the book:

“and all there is, is love and the body,

nothing to give but this moment…

And all there has ever been is you and I

so easily lost in the feelings, the reaching…

Our bodies, our trees of life.

The fruit of ourselves, giving and self-giving,

Some readers may well prefer this style; its willingness to grapple concepts even echoes Lucretius in that first stanza of Every Atom and shares a certain charming quirkiness with that Latin poet. The real point is, it feels like an entirely different poetry to the poet of Afghanistan and urban stories encountered elsewhere in the book, and it is this variousness of poetics that is harder to deal with in the context of a single collection.

“I want to make you come with just my tongue.

I want to make you come by barely touching you…”

of your right breast, beginning to tune your dial.”

The language here feels like it has gone beyond intimacy into the realm of a personal message to the lover, and risks staleness in the process. And yet in the very same poem we have the more ambitious “I will kiss your throat into offering.”

and the final phrase here displays a kind of self-mocking humour:

“Bread and salt to eat the sin of sorrow.

Clean the heart and the mind and the body.

Bread and salt – to love and be loved…”

…Following the forgetting of your face

I said your name aloud over and over.

Bread and salt – to love and be loved.”

“Her belly against my belly.

Silencing the guilt of seeking.

Moments of stillness and fullness.

Placing the heat of the sun where

the dark blood centres in seeking.

Her belly against my belly.”

Their syntax feels lacking in the additional fluency a revised scheme such as the one described should bring, and the music also suffers for a lack of energy, missing the urgency of a traditional villanelle’s form, which at its best (perhaps Dylan Thomas’s raging, Empson’s poison and waste or Cope’s humorous villanelles) chimes obsessively with either the ringing of a death knell or a wedding peal.

At times elsewhere in the book, as if he has drunk from a different chalice, a stranger, stronger poet lifts language off the page and into the stratosphere: the topsy-turvy eye in Blue, which perceives the sky from an off-kilter angle:

“Thank gravity for holding you up

on the ceiling of the ground. The temptation

to fall into the perfect blue

as if she was water, and beneath

her still surface an infinite black.”

Other highlights include the energetic, anarchic myth-making in Unwritten, and the bold verbal play of Gauntlets with its striking opening and closing lines “I caught the moon and turned it into a swastika.” and “Iran was asking Afghanistan  / to marry him, and she was taking her time.” There is also the witty and precise How to Become a Moth, and On Becoming a Writer. There is excellent invention, concision and wit in Love Poem:

“I want the next thing I write to have you in it...

…But the next poem

has a white wall in it and a halogen lamp

that’s so bright it leaves ghost trails in the eyes,

and is dangerously hot to touch.

… It will be a love poem, the next poem with you in.

They always are love poems, even when they turn out

to have bombs in them, or politics, or light switches.”

Or there is the remarkable and strange How to Sleep which I quote in its entirety:

and blend it with soma

to make an embryo,

who will grow through the rains

to become a copper-coloured man,

who will leave his ten white horses

grazing while he kisses you on the forehead,

leaving you clear as the sieve of the sky,

In this poem, with every line Siddique seems to pause and twist the idea in a slightly different direction, again and again.

A varied and various collection, then. What would we give for a slimmer, more cohesive book – of Siddique’s urban tales, his character portraits, and poems like these, which are pulsing with vitality and can take the breath away? Mike Loveday

Mike Loveday has an MA in creative writing from Kingston University. He is editor-publisher of “14”, a magazine devoted to sonnets, ghost-sonnets and stranger fourteen-line poems. The 13th issue will be published in April 2012. His chapbook He Said / She Said (HappenStance, July 2011)  describes a faltering relationship between two people of different nationalities.

Winston Plowes is our Bard in the Bog ►