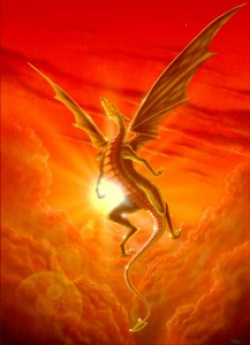 When dragon footprints stride across the sun
intention's wallet — empty — opens wide.
I tried to count the virtues one by one;
such diligence could not be justified.
For when the emptiness of mouthing ploys
reveal their dull derisive jeering taunts
I feel the frosty cold dark counterpoise
to all entreaties (then the shortfall haunts).
But all such grim considerations pale
to insignificance's scanty sky
while spoors of fire-breathing monsters scale
to realms which even love won't mollify.
There's no more baffling quandary that I know
than heights which have no coital afterglow.

The Party is Over ►