Gerry Potter interviewed by Dominic Berry about 'THE MEN POMES' 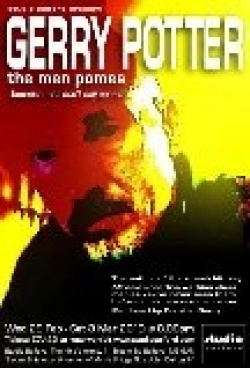 'The Men Pomes' by Gerry Potter 8pm, 29.2.12 - 3.3.12 Studio Salford, Kings' Arms, 11 Bloom Street, Salford £7 / 5
Tickets can be bought on the night at the door or bought online http://www.ticketweb.co.uk/user/?region=gb_northwest&query=schedule&venue=kingsarmssalford&month=1&day=29&year=112&interface=kingsarmssalford

Creator of Chloe Poems and writer of smash hit play 'Miracle', Gerry Potter brings his brand new one man show to his favourite theatre, Studio Salford, above The King' Arms on Salford's Bloom Street. The sell-out success of 2011's Manchester Literature Festival at Contact Theatre lands happily and haphazardly in its spiritual home.

DOMINIC: Gerry, can you tell me what is ‘The Men Pomes’?

GERRY:  ‘The Men Pomes’ is a one man show about men. It is what I call theatre verse, which is a mixture of poetics, theatre and stand up. It’s about the monstrous magic of men. Primarily working class men, but not wholly. It’s an exploration of this particular poet’s view of the masculinity he has been part of and is still part of.

DOMINIC: What, in your opinion, are ‘men’?

GERRY: That’s a big and fascinating question, Dominic, and has a number of constantly unravelling endings. To me, men are visions of masculine loveliness, industrial power and inconsistent understanding. Men are great, big shadows. And I like shadows, but sometimes you can get lost in them. To me, in many ways, men are a maze of shadows and this show reflects the way I have been so often confused and lit up by them.

DOMINIC: Why a whole one man show about men?

GERRY: Because there are so many unanswered questions! That’s because so many questions aren’t asked. I find men to be unfinished business and so writing a book of poetry about them was a way of finishing that business off for me. The poems had a big, theatrical feel and it seemed really easy for me to put them into a cohesive show. I think it is time men started asking questions about men in a more creative way. I think that this show offers that. Men are so often not seen as big, expansive and creative- certainly working class men aren’t. I want this show to maybe start to redress that balance. If we don’t offer creativity to men, chances are they won’t be creative.

DOMINIC: Is it an optimistic show?

GERRY: I don’t like the word optimistic. It offers too many variables. But this show is about the absolute wonder of men, whilst at the same time exploring their very dark natures. There is great humour in it but it pulls no punches when it comes to the punches men pull. So, yes, I would say there is optimism in it, but like men its optimism is fraught with danger.

DOMINIC: Do you think men will enjoy it?

GERRY: It is a show for men. And because it’s for men by a man I think men will recognise the stoic punch of it. Yes, I do think they’ll enjoy it- they certainly did at the Contact Theatre, where I spent a lot of time answering a lot of questions from men about men. But I also think they’ll be challenged, and men like a challenge, don’t they? So, in a way, it’s like throwing down a gauntlet made of velvet.

DOMINIC: What has been the reaction of women toward the show?

GERRY: I think relief! Conversations with women afterwards have been about how my understanding of men is honest and clear. I am very informed by the politics of socialism and feminism. I think because I am a gay man, and I have had problems with the brusque masculinity of men, that resonates with a lot of women’s experiences.

DOMINIC: Has it been done before?

GERRY: Yes. I’ve read a lot of poems about men’s relationships with men, certainly their relationships with their fathers; I’ve seen shows about men by men and women. I think what is different about this show is that it is done in a florid and poetic way which adds another dimension to the whole concept of men. I am offering a series of often magnificent and brutal imagery which is sometimes difficult but is full of love. I kind of want men to know that I love being a man whilst at the same time feel very nervous of being a man. So, yes, I think shows like this have been done before but not in this way. I think ‘The Men Pomes’ is a unique perspective on men.

DOMINIC: What do you think the audience’s reaction will be to such a poetry focused piece of theatre?

GERRY: I think there is a new and exciting vein of theatre verse happening in Manchester, certainly with yourself and ‘Wizard’, the wonderful stuff Pen-Ultimate are doing and Working Verse’s recent success at the Lowry. It seems that poetry is finding a new and interesting place to be and that is because there is a new vanguard of thinking what poetry should be. I am a performance poet from a theatre background and the natural home of what I do is the theatre. There is a growing frustration from audiences about noisy venues. You know as well as I do, Dominic, it is difficult to find a pub or club that isn’t noisy. The theatre is a perfect home to pieces like this. Audiences are reacting to that.

DOMINIC: It sounds like writing and staging ‘The Men Pomes’ has been quite a departure from you as an artist, especially from your gingham gown days as socialist transvestite Chloe Poems. Is this the shape of things to come from you from now on?

GERRY: Yes. Most definitely. I think ‘The Men Pomes’ is to date my best body of work and it has certainly had a hugely enthusiastic response. Even though autobiographical, it is a departure from my wholly autobiographical books, ‘Planet Young’ and ‘Planet Middle Age’. People have been saying that there is a maturity of language throughout the book and play which I think is about becoming an older writer. And I love that. I really do feel as if I am creating a piece of work which can exist as well on the stage as it can on the page and that there is a bigger opening for this kind of work in the future. I am excited by Manchester at the moment, and I have not said that for a very long time. That’s because people are starting to take risks again. Big, theatrical risks which are paying off. I guarantee ‘The Men Pomes’ will be risk worth taking!

My thoughts on Bolton's NEO:LIVE ►

Cheers Laura and Isobel :) The link to the Studio Salford website should take you right through to where you can buy tickets (or you can pick up them up from the door on the night, but its safer to get in advance so you know you got 'em) If there are any worries with the link just give us a shout :D

So that would be a show about men then?

Put me down for a ticket - I have a great interest in the opposite sex - and I'd love to see/hear just how they evaluate themselves :)