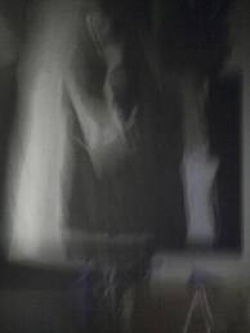 Many years ago,i was fishing a tiny stream known as Bezza Brook,it is situated just off Potters Lane in   Samlesbury and is a tributary of the River Ribble, It was way after midnight and i was fishing for eels that had travelled upstream from the river,    The night was still and balmy,the only illumination i had was my old bycicle lamp, this i used to light up the tip of my rod to detect any "bites"that may come from the deep hole i was fishing  .To my right was a pack-horse bridge that carried a farm track which led eventually to a public house, known then as the Five Barred Gate, now known as The Swallow Inn.    I am no stranger to night fishing and feel comfortable,as i understand most sights and sights of the darkness, so i don't fear the night. or do i ?, i was at one with the world,absorbing what the night and nature had to offer, my eyes were fixed on my rod tip when a movement to my left caught my eye, a less experienced person may have turned sharply to see what had caused the movement, but i refrained from doing so, i turned my head slowly but deliberatly to my left,the movement was still visible, and when my head was fully turned the source of the movement  came into view, what i saw is'nt easy to explain,but imagine if you will a plume or whisp of smoke,which resembled that of a human form,it had the width and height of a human, it was roughly 50 yds from where i sat, it was moving down the bank,the same side as myself it was a slow but deliberate movement,it reached the bottom of the bank and up to the waters edge,it moved across the stream but no ripples broke the surface as it would have done if you or i crossed ?, On  reaching the bottom of the far bank,it veered left and up the far bank veering left all the time until disapearing from view towards Potters Lane, it was gone, i don,t recall how long i sat in sheer bewilderment but i do recall making a hasty retreat homeward, even to day i do not know what i saw that night, all i know is i did,nt know as much about the night ,or it,s visitors as i thought i did.     .