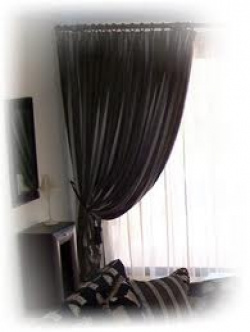 So we had a long chat about ghoulies and stuff
And finally I thought I'd done enough
They don't exist, we'd at last agreed
and for Dad's rescues there was no more need

But then one night, while I was pottering around
a familiar shriek came drifting down
What's up? I cried, not a ghost, that's certain!
No, Daddy, she said, I'm frightened .... of the curtain....

This brings back vivid memories from one of my kids. We had bright yellow curtains with drummer boys and teddies all over them. She swore they moved in the night and became terrified of them. The sleep I lost over those curtains!

The wardrobe terrified me when little lol...

Heh - I used to be terrified of my toys waking up in the night when I was asleep, and doing horrible things to me. I liked them being there in the day - should have just turfed them all out of a night!

the curtains John-
they were not made by
Laura Ghastly were they?

The poem is beautiful! It's light like a feather! It flows so naturally,so gently.

Very funny. I have a daughter named rachael alice clare...

I bet you had a bit of trouble telling her that curtains don't exist! :)

A true story -- we nearly crippled ourselves laughing at her!