This side of the border: spoken word in Wales 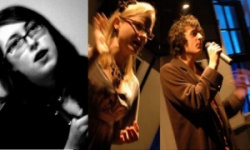 "Spoken word" and "Wales", at the moment, are not synonymous. While a healthy performance poetry scene exists amongst Welsh speaking poets, with regular poetry "stomps" (slams, essentially)  and the annual Eisteddfod gives its highest honours to poets, the English speaking of us are left with only two dedicated events in the whole of the region – the Absurd in Bangor and Word Up! In Cardigan – both difficult to attend unless you are in the area, and with little else left to choose from.

My collective, Jam Bones, ran for two years, until December 2010, with monthly events, open mics, and the odd mini-festival – but my own performance and writing commitments have forced me to reduce this to the odd, irregular happening. This year, Jam Bones helped promote the Spoken Word All Stars event in Cardiff in March, and I understand that Jaybird will be bringing a live literature event to Wales later this year. But, generally, performance poets who tour do not make it over the border, and Welsh word-lovers are forced to fly to Bristol for their fix of the good stuff, where a vibrant scene exists thanks to Steve Larkin’s Hammer & Tongue, Jack Dean’s Brizzlemania, Tilt’s sometime forays into the city, and so on.

Nevertheless, things in Wales are improving. Spoken word is on the up, and performance poets are now more readily accepted, invited, and understood. A few years ago, open mics were for musicians only; recently, I have noticed that open mics have become more open, and "poets" are included on the list of potential performers. Folk events such as the Folk Collective in Newport and Folk the Owl in Cardiff are happy to include perf poets on their bill, and Literature Wales have given us Aisle 16, Hannah Silva, and Byron Vincent as part of their Bay Lit Festival in Cardiff in recent years.

The very new National Theatre Wales, barely a year old, have also shown interest in, and commitment to, the form. Two of their plays, so far, have been penned by poets – Owen Sheers, who has won the Welsh Book of the Year Award, and Kaite O’Reilly, who won the prestigious Ted Hughes Poetry Prize for her play, The Persians – and just this month saw NTW’s first open mic event in Cardiff. John McGrath, formerly of Contact Theatre in Manchester, has long been interested in spoken word, and is keen to see more poets involved in the National Theatre Wales programme. This well-attended event drew all sorts of poets, from first-timers to seasoned pros, and was followed by a workshop with Lemn Sissay the next day. I attended both, and found them to be exciting and encouraging, with plenty of new voices on show, thanks to NTW’s wide-ranging influence and ability to reach people.

Lying between literature (governed by Literature Wales) and theatre (ruled by National Theatre Wales), spoken word, in Wales, is the cross-over genre that has been overlooked for too long. Finally, in this little place, it is getting some big attention, and that is a marvellous thing. However, it is precarious, also – for, not being either literature or theatre, spoken word at the moment is still working to be accepted as its own genre. Poetry is accepted – but performance poetry does not have the same following. However, if Literature Wales and National Theatre Wales continue to support it, then hopefully, one day soon, Welsh performance poetry will be as well-established, accepted, and admired, as it should be, for the talent is certainly here, if not the forum. The future is hopeful, then, and I will keep you posted on how things progress, this side of the border.

Breath into words: poetry and yoga ►