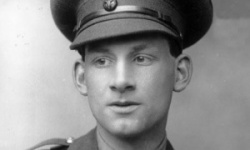 Doing his duty he never erred

Between the rising and setting of the sun

In the days of World War One

Saw the carnage from shell or gun

Still alive when the war was one

Brought home the hell it had been

As they brought more ammo from the magazine

His colleagues fell in that muddy hell

The flower of a nations youth lost

Did the Generals care about the cost?

No for he took the time

To make “The General” his most famous rhyme

Telling the truth of the war story

Wars go on and yet

The war poets say “Lest we forget”.