Below the Belt by Mia Darlone 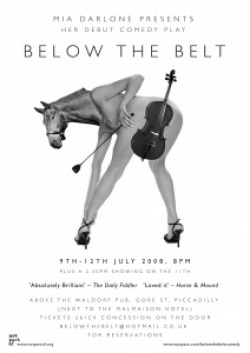 REVIEW: Below the Belt, Manchester July 2008

In 1986, along with 49,999 others, I was standing inside the home stadium of a West German football team in the centre of Cologne. It was late summer and I was enjoying a late balmy heat and strong Bavarian lager - and the reason? I was watching a live performance from the inimitable rock band - Queen . To be more precise, I was watching and listening to one man and his performance , a performance which captivated, mesmerized and more than fulfilled the definition of the word ‘entertain’. I wasn’t a Queen fan. I went along to watch Mark King slap his bass and warble his way through Level 42’s back catalogue of one hit, but come the end of the night, Freddy Mercury had worked his kinda’ magic on both me and those thousands of others.

In 2008, along with 49 others, I was sitting inside the upstairs four walls of a Manchester city centre pub, The Waldorf. It was late summer and I was enjoying a late barmy deluge of rain and strong Bavarian lager - and the reason? I was watching a live performance of the inimitable play - Below the Belt. To be more precise, I was watching and listening to one woman and her performance, a performance which captivated, mesmerized and more than fulfilled the definition of the word ‘entertain’.

Actually, that’s not quite true. I was writing for affect. I was watching six young and ridiculously talented actors, only one of which, hides behind the non-de-plume of
Mia Darlone who credits herself with the titles - Writer, Director and Performer.

So, who is this person hiding inside the smoke and mirrors of pseudonym?
Well, Mia Darlone is young, beautiful and talented and if success is measured in these three traits then she would already be viewed as a potential star. Fortunately for the rest of us, there is more to achieving success than possessing youth, beauty and talent. How about dedication? How about commitment? Application? A little bit of luck, even?
‘Below the Belt’ combines Darlone’s first attempts at writing, producing, acting and directing. This level of involvement is not unique alongside an individual’s quest for success, but can these separate demands on a person’s time and energy dilute one role or the other? Well, of course they can. In Darlone’s case however, they simply appear to compliment each other.

By her own admissions writing is her first love. She cherishes it like a baby, and this level of affection is perhaps the reason why she is so heavily involved in her first play and its production. Who can blame her? So, what is it that she appears so obsessed with?
‘Below the Belt’ has many connotations. In Darlone’s context it’s a euphemism for sex. It’s perhaps the only part of the play’s dialogue that relies on euphemism. The remainder is much more forthright and to the proverbial pointy bits. The story centres around a character Diane, a sex therapist with an insatiable appetite for, rather ironically - sex. The part is played to a worryingly convincing standard by Natalie O’Brien who demonstrates, during the course of the play and for those who may have ever wondered, how to make love to a cello.

Diane is the soundboard for the play’s other characters each played with conviction and an alarming realism given that all their spoken dialogue is in rhyme. Gerry Mc Laughlin plays Robert a man’s man who is the boyfriend of Susan a demanding character who harbours a passion to become impregnated with spermatozoa as well as the occasional root vegetable.

Their relationship is discussed with Diane who during their sessions takes an obvious shine to the rugged good looks of Robert. This attraction culminates with the insertion of a ladies bendy toy into an intimate orifice - live on stage. This scene alone is worth the entrance fee.

Between these moments of sexual madness, Craig a chav character and acted to a reassuringly believable level by Chris Barlow and his work- shy girlfriend, or ‘ex’ girlfriend as the actor who plays her, Tracy Benson, constantly reminds us. Together they perform their lines to great comedy affect, but Tracy in particular forced me to laugh out loud with her lines about her ex-boyfriend and her dislike of his ‘coming face’. Brilliant. Taken from Darlone’s stand alone poetry it was interspersed with other creative and original one liners and puns but few double-entendres. It didn’t need them. Talking about sex and knobs and fannies is not original. Yet in a rather bizarre way, it is made to sound fresh and feel brand new. Maybe it’s the idea of writing the play with a consistent rhyming scheme?

Yet the idea of rhyming dialogue is again not unique. A fellow named Shakespeare touched a deft hand on the breasts of success when he tried it - but that was over 400 years ago. Although I don’t suppose the notion of inserting root vegetables into a partner’s orifice was then at a stage where it could be verbalised to a audience containing the gentry. Whereas Darlone’s audience seemed much more receptive to the idea. This is reinforced by the sounds of pure and honest belly laughter , provoked by a script and its well timed delivery . Every expletive known to an adult world is in there, but if the talking about sex, or the mere mention of sex, in all its different guises, makes you feel uncomfortable then you would perhaps be squirming in a seat for a full sixty minutes or so, the duration of the play’s solitary Act. There is little respite. The rhyming couplets are at times so blatantly obvious yet delivered in a dead-pan style that you cannot help but find yourself tittering uncontrollable plosives. In other parts of the script’s dialogue, the rhyming scheme is not as obvious although this may have had something to do with an actor’s ability to deal with poetic intonation. I did feel that in some small parts some actors dealt with the rhyming scheme better than others. In those scenes which lend themselves to hyperbole, these are the ones where the script really comes alive and on occasions you will fail to notice that the dialogue is still in rhyme.

What Darlone has achieved with her script is complimented by those actors who brought it to life. It’s very British. It feels so much like music hall variety and farce and yet there is a thread of tragedy. In the odd moment where the script is limp, its erectile tissue is pumped with the life blood of quality acting. On the odd occasion where the acting loses its pertness, it’s supported by the cups and straps of a Wonderbra script .

A Kinda’ Magic tour. The experience will remain with me forever.
I was there when Mia Darlone showcased her many talents in ‘Below The Belt’ and if there is any justice in this literary - performing world of ours , both Mia and her baby are destined for those rock star sized accolades.

Her play 'Below the Belt' runs until Saturday 12th July 2008 above The Waldorf, Gore Street, Piccadilly, Manchester.
Tickets £6.00 with £4.00 concessions

◄ In The Write Light Workshops

Hi Darren, I had the pleasure of of some 'Below the Belt' action on Thursday night!

I have to say it's one of the most enjoyable nights I've had in a long time, the play of course, the chance to chat with Mia and the cast and the whole atmosphere of the event. You have done a fitting tribute here and I can only echo what you have written, well done Mia and Co!

As far as the play was concerned, it was down right rude! Fantastic! Considering the content, it was (I think) a brave thing to do, I thought Mia made a bold move doing this and really stuck her neck out. If this is a sign of her work then she will be arrested very soon!

I actually think it worked well though because it was done in poetry, and even though it was risque (so no problem for me!) no-one would have been offended. Which considering some of the content would have had Chubby Brown thinking twice, is a tribute to the way it was written and performed.

I thought the sex therapist theme was very funny. Diane was an excellent character and reminded me of a lady from the Dear John sitcom who always said 'are there any sexual problems'! Brilliant performances by all, they should be proud to have been part of it!

As I said it was great to meet Mia and have a chat with Tracey and Emma. All in all a truly excellent evenings entertainment. I'm not surprised to hear that you enjoyed it as much as me and my friends.

I wish Mia and the others all the best for the future and I will be proud to say I knew them when they played the Waldorf!! Cheers Jeff

You have taken time to write a story tellin review!
This sounds an excellent powerhouse show
thanks for sharing Darren.