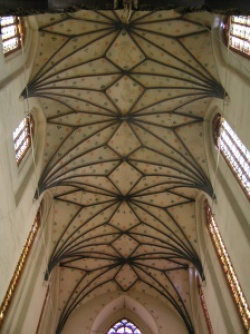 I had marvelled at this church the day before, and today noticed the door slightly ajar
I hesitated for a moment, and then knew that if I was ever to see it’s inside, that it would have to be now.

Inside, a couple of people moving towards me, several people around the altar area and a small congregation of about 20 people to the right.

I walk along in awe craning my neck backwards, looking up high, high, high sideways and all around in an attempt to get the measure of this lofty wonderful space.

A massive open space with the longest and narrowest windows I have ever seen – wow! Must be five feet wide and eighty feet long stretching skyward with religious depictions – Wow!

Ten domed cushions latticed with thin wooden strips interspersed with pink and pale blue flowers make up the central part of the ceiling that stretches from the door to the altar.

Ornate golden three-dimensional depictions of the Virgin Mary and such abound, the altared area has two sets of dark, thin and intricately carved medieval wooden stalls for friars - wow!

Several people dressed in black, all men I think, suddenly move in and disturb my writing.
They are carrying heavy pine-leaved wreaths, which they purposefully lay on the ground

I get up and move away from my front row seat and gather my things, camera in case with shoulder strap, laptop in bag and A4 pad

As I walk I hear the deep vibrating sound of the multi piped organ high up in the rafters. I hear just enough to make me realise my error and predict the immanent

I aim for the 600 year-old Franciscan-monk doors, I don’t arrive before seeing the first two of six carriers come though.


I stand aside to the left with two other men near my exit and watch the procession pass by in slow motion.

My eyes operate like motorised camera shutters as I turn, track right, back towards the altar, focus in on and capture the gleaming brass name plate on the pristine beach coffin – “Hubert kolecki” I read – I had happened upon a funeral

Thank you very much Cynthia for your comments. Not been on this site for a while. But was inspired to write a poem after seeing a fantastic programme on TV on sunday about the unvierse - put things into perspective for me, literally! All the best.

You have real skill with writing vivid imagery. I'm presuming this is offered here as poetic prose. Once again the inter-mixture of ongoing actions and immediate visual observations make an interesting whole experience.