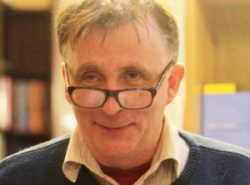 The Irish poet Kevin Higgins, who continued to write poems in hospital as he lay seriously ill with leukaemia, has died in Galway at the age of 56. The poems were published regularly in the Galway Advertiser, where journalist Declan Varley wrote: “When Kevin was diagnosed with serious illness late last year, he and I agreed to publish in poetic form in the Advertiser, his regular musings on the reality of illness and hospitalisation. This process yielded some wonderful works which illustrated that no matter how much the body might let you down, the mind and its creative impulses continue to create thought-provoking works.

"Just a few days ago, Kevin sent me the last poem. I was working on placing it in this week's Advertiser when word came through to me that he had passed away. To his beloved Susan, to all his friends, to all he inspired and encouraged and taught, my deepest condolences.”

Kevin Higgins was born in London but spent much of his life in Galway. He curated and programmed the ‘Over the Edge’ literature evenings in Galway city library with his wife Susan Millar DuMars.

Ireland’s president Michael D Higgins said: "It is with a great sense of sadness that all those who knew the poet Kevin Higgins, either in person or through his poetry, will have learned of his death. Brave and writing as he was right to the end. The partnership which he shared with his partner in writing, Susan Millar DuMars, saw them both working together in a way hard to surpass in terms of making a contribution to the arts through writing.”

He added: “His final pieces from hospital show a person of the deepest humanity, gifted with words and full of courage that he would wish for all to have for themselves. He will be missed by so many, far beyond Galway.”

Kevin Higgins published several collections of poetry, and also appeared in radical anthologies such as Emergency Verse - Poetry in Defence of the Welfare State, and Poems for Jeremy Corbyn, turning up to read at the latter’s launch at Housman’s bookshop in London in 2016. He said there: “I took up poetry to get away from politics. The fact that I’m here is a monument to failure.”

The comic stand-up poet Robert Garnham, who edits the online Spilling Cocoa Over Martin Amis, said:” I’m very sad to hear of the passing of Kevin Higgins. In my role as editor of Spilling Cocoa, Kevin would email every month or so with a new poem and invariably we’d always have a bit of an email back and forth, chatting about things.”

Kevin continued to post on social media during his final ilness. Here is his final Facebook post, just days before he died: "Latest from the Haematology Ward at University Hospital Galway: great questions nurses ask you "so are you, like, world famous"? (as a poet). Poet's answer: "Lying on a hospital bed in a ward such as this, describing one's self as 'world famous' is a quick route to madness." Nurse's response: "Well I Googled ya and you seem pretty famous to me."

This is Kevin’s final poem that he sent to the Galway Advertiser. It is titled ‘I Always Thought I’d Live’.

I always thought I’d live to learn how to swim

do the backward butterfly to Olympic standard

at least one albeit slightly polluted drop.

I always thought I’d live to learn how to drive,

and see the Democrats legislate for free

the books off the study floor

and see fascists give up

have eloquently made them

see the error of their ways.

But the books that made me

and I don’t have the oxygen to shift them.

My consultants are unanimous

and Trafalgar Square are over.

by over enthusiastic members of the constabulary

is a luxury my lungs can no longer afford.

Even holding a placard in my wheelchair

would soon have me gasping for breath.

And I thought I’d always live.

'A poet who will not conform to expectations': Selima Hill wins King's Gold Medal for Poetry ►