Poet of the borderlands: uncovering the riches of Northumberland with Noel Hodgson

To Horncliffe, the most northerly village in England, on the southern side of the river Tweed, for a poetry reading. It is what the Scots call a dreich day, cold and wet. Well, it is January. But the memorial hall is warm and welcoming, and we are here to hear Noel Hodgson, poet of north Northumberland, read from his three collections, and from a forthcoming one, too.

He opens the reading with a warning, telling the sizeable Horncliffe Arts Society audience that he has “never thought of myself as a poet … rather someone who sketches portraits, pictures”. Noel usually tailors the poems he reads to the location of his reading, and opens with one about sitting on a seat overlooking the Tweed and gazing into Scotland, “with independence looming, I observe wryly that Scotland looks the same as England”. His seat is an “ideal place to peruse and ponder” this “epic river” that forms the border. 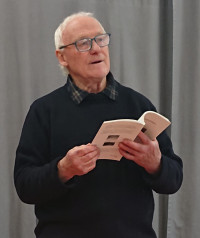 Noel, pictured left, sometimes picks up local stories that may or may not be true, and imagines and or embellishes them, such as that surrounding Bride’s Brae, Ancroft, where in the early 1800s a bride is said to have been killed on her way to her wedding when her horse-drawn transport overturned. Ancroft itself was a plague village in 1667, with corpses were carried out into the fields and buried beneath shelters made of broom. When this didn’t work, the entire village was razed to the ground.

He also has a poem about Berwick, that remarkable border town that has changed hands a number of times over the centuries. Noel’s poem isn’t about that, but about a ladies public convenience, one of the first of its kind in the country, which freed women out walking from the “urinary leash”. It is now a grade II listed building. There is another poem about walking the walls of Berwick, a town that LS Lowry liked to visit, and often painted.

This is definitely not your average poetry reading, whatever that is. Noel has a cheery, energetic manner, which you might expect from an only recently retired PE teacher, and is confiding, revealing a huge breadth of local knowledge, as he delivers his poems. He mentions that he’s not a rhyming poet, although you can find rhyme in his poems: “I find rhyming difficult because I feel you’re being policed … it’s not for me.” He prefers “the rhythm and the sound, and the way the words flow”.

For Noel, “people are important. Places are important.” ‘Below Flodden’, the title poem of his first collection, is a moving work about the landscape of the famous borderlands battle where a Scottish king and most of his nobles were slaughtered, while ‘For Susan’ refers obliquely to the death of 11-year-old Susan Maxwell, abducted and found murdered in 1982. A happier poem, ‘A Great Love’, celebrates the tenderness between a long-married farming couple, while ‘A Fisherman’s Life’ pays tribute to 94-year-old Henry McCreath, a former prisoner of war, who fails to land a huge salmon in his 90s. Noel matches the salmon’s escape with Henry’s achievement in surviving captivity and the second world war. 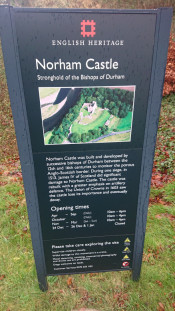 He is fascinated by Northumberland’s “amazing history”, not just its bloody roll call of battles, but its pre-history, too. Thus his imagination is fired by ‘Kettley Stone’, a rock near remains of a hill camp that has a large, chiselled bowl. He conjures up chieftains, a tribal gathering and ritual in his poem.

Noel Hodgson operates below if not beyond the poetry scene radar. In a poem about Alnwick’s famous Barter Books, a secondhand shop situated in the town’s splendid old railway station, he finds one of his collections situated on the shelf with Heaney and Hughes. “It felt an honour / To line up with two greats; / A local player standing / Between two internationals.” But he can’t accept his position, and removes his book, placing it on another shelf.

He doesn’t court local media. He doesn’t enter poetry competitions, or attend open mics. He was invited to publicise his poems by a local publisher, the Reiver Press, which has made beautiful productions of his books, including photographs. His next collection will be called Stovies on Monday, the title referring to the weekday dish made of leftovers from Sunday lunch the day before. Noel mentioned the “rich smell” of stovies cooking. I for one can’t wait to see the new poems that he dishes up.