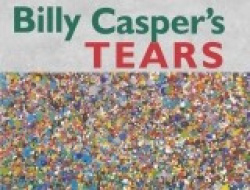 Paul Summers is a poet born in Northumberland and currently living in North Shields. He has published a number of poetry collections, written for TV, film, radio and the theatre, and recently edited William Blake at the Bridge Hotel, an anthology of 10 Newcastle poets. His latest collection, Billy Casper’s Tears, is based on five years of daily walks along the shore at the mouth of the river Tyne.

But do not expect a collection of naturalistic, wildlife poetry. Instead, sanderlings, curlews, redshanks and gulls, as well as the fog horn’s dirge, provide a mournful backdrop as Summers combs the sands, his short lines like cold dashes of sea spray on the face:

the next pot full

& and in the lull

The title poem, ‘Billy Casper’s Tears’, refers to a kestrel in the opening lines. The title recalls the boy-hero of the film Kes, and the Barry Hines novel A Kestrel for a Knave, both set in Yorkshire, rather than in the north-east. But I infer from the reference a more general reflection on the shattering of working-class hopes and dreams, made plain in another poem, ‘re-union/night at the museum’, which lists “a reliquary of losses”:

‘Bun stop’ is a Tyneside elegy with a list that includes the kittiwakes that used to perch on a now-demolished flour mill, part of the “cadence of decay / in the tyne’s chill madrigal.” It has also been turned into a short poetry film. ‘Confluence’ can’t avoid the “rusted iron/ & tired steel / of red & black / of tyne & tide.” There are poems about people, too: one for Joe Skipsey, a 19th century poet from Percy Main colliery (‘song for joe skipsey’); and the brutal reality of ‘#resist’:

or words to that effect

On one walk the poet finds someone “has smashed / my latest cairn / to smithereens … / i grieve a while, / then build another / in its footprint.” (‘palmyra, ne30’). Yet the final poem in the collection is a touching ‘lovesong’, “beyond / this brine-etched / window’s bird-shit / atlas,” a moment of re-affirmation, and of hope.

Lyrical images of decay, in the teeth of the wind at the Tyne’s mouth, come naturally to Paul Summers in this collection. But there is a mood of angry resistance in these poems, too; head down, despite everything, ploughing on.

Shelling Peas with My Grandmother in the Gorgiolands: Sarah Wimbush, Bloodaxe ►