Shelling Peas with My Grandmother in the Gorgiolands: Sarah Wimbush, Bloodaxe 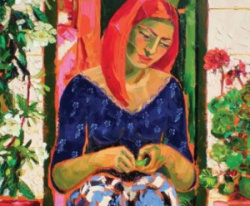 Sarah Wimbush is a Leeds poet who originates from Doncaster, and whose debut poetry pamphlet, Bloodlines, won the Mslexia/PBS poetry pamphlet competition. She has also been a winner in the Poetry Business book and pamphlet competition. Shelling Peas with My Grandmother in the Gorgiolands deals with the poet’s background in the coalfield and steelmaking area of South Yorkshire. It also deals at length with her Gypsy/Traveller heritage courtesy of a maternal grandmother. Gorgio is a Gypsy/Traveller word for non-Gypsy/Traveller.

This is an impressive collection, with a very favourable first impression formed by the physical appearance of the book. The cover features a detail from Lucy Doyle’s painting Shelling Peas in a beautiful cover design by Neil Astley and Pamela Robertson-Pearce.

The first poem, ‘House’, a three stanza, eight-line poem, demonstrates an audacious confidence on the part of Wimbush. Resisting the natural inclination to open with a benchmark, a manifesto perhaps, she settles for simplicity. 'House' takes us into William Blake territory of unfussy diction and repetition; a modern-day nursery rhyme, a Song of Innocence leading to the telling last line of “planks leading up to a framed sky”. If we think of this as houses and window frames putting a frame (cage?) around freedom, then the Blake allusion still fits. Further reading will reveal that ‘House’ is an appropriate opener as we will encounter themes of childhood recalled, freedom restricted, and a location identified.

The second poem, ‘White Cottage’, which is much longer, leads up to the significant moment, “When you finally took a house…” The “you” here presents us with the usual problem. To whom does "you" refer? Is it the poet writing in the second person, or an as yet, unidentified adult person in a position to set up a household? And it is the word house that resonates here, used three times in the first two lines, or four times if its inclusion in "household" is counted.

Is this such an ominous event, this settling down to live in a house, this domestication? The initial list of innocuous events and actions would suggest not. Located at the end of a lane with walnut trees towering above the church, it was a place with a limewashed privy and a broken stool with a heart carved through the middle. It was a place where curtains and a new kitchen could be fitted, a place in fact where settling could take place, but the reader needs to ignore the sinister elements lying beneath the lines, “You fitted a kitchen with the chop and slice / Of your hands, here, here, and here.”

Such an emphasis upon here, as though the place, this white cottage, wasn’t being fully accepted. From this point in the poem, we encounter a further list of remembered events, each of them imbued with a hint of the sinister or even the downright horrific. There’s a “bullfrog trapped in the cellar”. It is a cottage built of “silences”, a “museum house”, a “Haunted House” where “Walnuts blackened in jam jars like mouse brains”.

Having set the location, the poem then moves to a clearer picture of the “you” person, the woman who “silenced that bastard frog” by filling its priest-hole living space “with barrows of sand”. The discomfort increases as the poem concludes by detailing how the woman in the cottage kept a fire on the whole year through, how she “pulled her own teeth” and “ne’er possessed a watch”. Nor is there any official record of her existence, the final clue that this woman could never make a cosy habitation of this white cottage. Her life has been bound up by all the pea fields she had worked in, the names of which she could recite, and the sense that another purpose waited for her: “You stood by the door, waiting / For the Gypsies to come and take you home.”

This final couplet establishes a sense of location and purpose. It is a recall of place and heritage defying cosy conventionality and bourgeois judgments. It also sets up the remainder of the collection which begins with the title poem, an unromanticised introduction to Gypsy/Romany life. This poem is mostly a list of negative instructions, insisting on reticence, “Never tell anyone/when the visions come,” which culminates with a metaphor for the mouth in turn as a book and then a knife:

and if, one day, you’re in the company of Gorgios,

Mind when you leave the book of your own mouth open,

When to fold it into a crossed knife.

The reader might well ask, is this an instruction on when to communicate and when to fight? Three poems in and the scene is set for a colourful collection centred on heritage, familial influences and language used as a dynamic force. A collection where the poems will continue to disorientate. Take the first person ‘Carroty Kate’ who introduces herself by saying, “I am dressed in last night’s campsite / And dead man’s boots.” She gets by through by “dikkering” (fortune telling), and she admits that in times gone by she would have met a grisly end for such behaviour:

dragged me to York Tyburn in a haycart sat on my coffin,

Where I’d be dropped

From the Three-Legged Mare –

The inadequacy of official census records, how to pierce the ears of a child and the wisdom to be picked up as in ‘Gran Violet Applies a Poultice’ - the richness of the Gypsy/Romany culture is laid out in the first half of this book which culminates with ‘Bloodlines’, a poem intriguing in its layout that takes us on a journey investigating and learning about the essence of the horse-drawn, caravan-travelling lifestyle. It’s a poem that repays endless readings in order to reach an understanding of its power, to fathom out the mystery of heritage.

In the lea and the lanes there must be

Someone who can tell you about the Bloodlines; about

The rhythm of your tongue, your flying fox glare,

The need to set the curtains ajar at night.

No definitive answers are presented, but inevitably, this poem significantly ends with the word "road".

When a poet has already laid out a life and background, it seems odd to say that the second part of this book is more autobiographical. But there is a distinct shift of tone away from the mythical towards a greater social realism and a way of life which, if it hasn’t already disappeared, is certainly under threat. For we are in the South Yorkshire of the 1970s and 80s with its redolent place names: Rossington, Markham Main and Edlington among others. Wimbush shows us once again that over-sentimentality is anathema to her as she deals with the death of the mining industry and the emasculation of a workforce with an unflinching deft hand:

The amber of a cigarette, a finger held aloft

Drawn into a tail of drooping ash.

She also appreciates that horror is much more potent when set alongside the ordinary. ‘Visiting My Aunt on her Birthday, Ist September 1979’, a poem that illustrates that very often less is more, begins with the detail of using a licked finger to lift hundreds and thousands off a plate. There must be some fancy cakes in evidence here, a birthday cake, given the title, but any innocent joy is soon subsumed by the beeped news from the radio that “Barbara Leach is added to the list”.

The horror lies in the absence of detail. There are references here enough: the “Sunderland twang” and interviews by West Yorkshire police, to tell us that this poem centres upon the reign of terror conducted by Peter Sutcliffe, the so-called Yorkshire Ripper.

When, in stanza three, “Don wanders in with fragment of bone/from the border,” it is highly disturbing. On account of his Sunderland accent he has been interviewed twice by the police, but his handwriting didn’t match. It is a potent reminder to anyone who lived in the area at the time that almost everyone was a potential suspect … or victim.

Elsewhere, Wimbush makes the ordinary extra-ordinary; something as innocuous as a teacher’s pencil sharpener can be the starting point for a poignant reminiscence about her father and the link between “daughter, sharpen, write”.

Examples are numerous. Waiting for her daughter outside her boyfriend’s house becomes the vehicle for a perfectly described encounter with a vixen: “fire on black – a comet’s tail.” ‘Things My Mother Taught Me’ could simply be a list poem, the sort of thing churned out at poetry workshops up and down the country, but Wimbush uses the structure of the poem to make a telling point and, even at this remove, one can almost see the twinkle in her eye when she opens the poem with a question,

“So, know how to recognise a female crab?” After many diversions which take us around how to buy meat in the supermarket, how to help a fire to catch, and so on and so on, we finally arrive, 25 lines later, at the denouement, the final two lines where all is revealed.

I suggest you buy a copy of this book to find out the difference between male and female crabs. It will be money well spent as you will also find yourself in possession of a book of poetry where the poet is candid in her exploration of her roots, playful in her use of language and joyful in her celebration of people and places. It is a highly enjoyable and engaging read.

Sarah Wimbush, Shelling Peas with My Grandmother in the Gorgiolands, Bloodaxe, £10.99