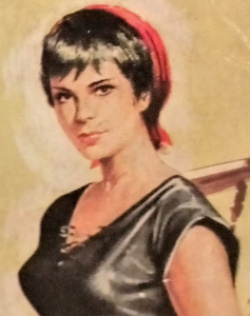 Mary Delahinch was often seen with Pappeety,
her short-haired, long-legged Patterdale terrier who,
possessed of a powerful nose, was sometimes used by Colonel
Buntingdon-Blythe to discover a rebel band’s hidden gunpowder.

For this cruel man knew her secret – that she was the illegitimate
daughter of Fletcher Christian, the notorious mutineer,
hunted on the high seas after he’d left his tyrannical captain,
William Bligh to navigate a vast ocean with just a compass and sail.

The colonel learned of this through disgraced doctor,
Theosephus Tucklady-Tallimeed,
who, though discharged from His Majesty’s navy through drunkenness,
not to mention his obsessive pestering of the Admiralty
with his eccentric ideas – such as sneaking up on an enemy frigate
under gas-discharging seaweed – had gained a reputation as a crazy inventor.

So, seeing an opportunity to profit through blackmail,
Theo told the military man that this well-spoken lady was not,
as everyone believed, the orphaned offspring of a Dublin merchant,
who’d died on a voyage home from Spain, leaving her his country estate,
but was born, as the old folk say, on the ‘wrong side of the blanket’.

Mary hated letting Pappeete be used to sniff out ‘These Fenian devils’, as her uncle called them.

So to annoy her dour-faced relative she flirted with one of these ‘dastardly’ rebels,
and, when asked why, declared, ‘For a penny bet.’

She looked at him with a smile. ‘Well, I did get a kiss from Michael McDevitt.’

But her uncle’s reply, ‘If I were a young man, I’d leather your arse!’,
was met with a girlish laugh, ‘Funny, that’s what Michael said he’d do if I tell anyone!’

Then Mary said in a mock, Mayo accent, ‘He did say I have a lovely…’
But her uncle had walked off with a curse.

Mick was to Mary’s aristocratic neighbours a thief and scoundrel
– but the downtrodden peasants saw him as their hero.
He ran the yeomanry ragged, planting false trails all over county Mayo,
but unknown to him, was being observed through his telescope by Tucklady-Tallimeed,
eager to gain a substantial reward.

Michael was drinking with Padraig, Buntingdon-Blythe’s gamekeeper,
hoping to learn how the authorities had foiled his plans.

But all he discovered was that his childhood-love was learning
Irish and playing Gaelic football, delighting in the fact that unlike
the English game of rugby, you were allowed to make a forward pass.

She even tried to take up the game, but was derided by
those who belonged to what her uncle would call the lower class.
So she set Pappeety on the trail of an old fox, in Billybruggan woods,
to her the epitome of the mythical Reynardine, a fox-like creature who,
according to a medieval ballad, inhabited the forests of Britain.

Sure enough, the little sniffer led her to a nest of vixen,
their mother a victim to the colonel’s hounds.
So Mary reared them in the woods, singing Gaelic songs to
irritate the military men, as well Rabbi Burns’
My Love Is Like A Red Red Rose and Sir Patrick Spens.

But one fateful day a dishevelled figure appeared and sang,
A Man’s A Man For All That.
She looked round to see her childhood love Michael, saying, in a breathless voice,
‘Oh, that’s my favourite of Rabbi’s.’

‘Nice to know,’ he whispered. ‘But shift yourself, the hounds are after me!’

Then after she whispered in her terrier’s ear, Pappeety sped off,
and they heard the call, ‘That way!’
Taking advantage of the diversion they made for Ballyboggan Bay,
where they found the terrier, whose nostrils had guided him to his mistress.
Boarding a French merchantmen headed for the Americas they,
due to storms and a drink-sodden captain, landed on Tahiti,
to be greeted by an old man who introduced himself as Fletcher Christian.

‘I’ve brought you some vixen as a present,’ she declared to the delighted chap,
‘and Pappeety, a short-haired, long-legged Patterdale terrier.’

‘Oh great, I can use the former to outfox my enemies
and the latter to find my spectacles, which I leave all over the island.’

Then his daughter became serious, ‘But how did you escape the navy?’

‘In my youth I dived for jewels buried in the coral, and so can lie submerged on a shoal reef.’

Looking at her, he said, ‘I’m sorry I abandoned you, but Captain Bligh forced me to give you up.’

‘Oh, if you hadn’t have done that I wouldn’t have met my love, Michael.
Hang on, he’s just fetching the coconut milk, and we’ll have some tea.’

Fletcher asked, ‘Is he a decent cove, maybe a gentleman?’

‘Good, I’ve had enough of gentlemen, he should fit in with my band of daft mutineers,
who have joined me on my island retreat,
because every island they chose as a hideout turned out to be volcanic.

'Oh, has your intended any medical training?
We’re badly in need of a doctor of physick.’

Then, out of the surf rose a figure, bedecked in coconut shells,
that appeared to form some sort of breathing apparatus.
A shocked Fletcher cried, ‘Why, I recognise that hollow-cheeked face.
Oh, what’s that smell?’

It was his former naval colleague, Tucklady-Tallimeed,
whom he’d left with captain Bligh, who declared, ‘I followed you unnoticed,
hidden by my gas-discharging seaweed, whose noxious fumes discouraged close attention.
using my network of fellow cast-ashore sailors and ladies of ill repute,

'I was able to discover your expected landfalls at every port.
‘But I won’t be surprised if you reject me, for I am that traitor who forced
you to flee back in county Mayo.

'On a previous voyage to this place I met my love, a native called Mannapapatee,
who stopped me drinking – well, she did enjoy a drop of coconut brandy herself,
and we got on like a house on fire – until I was dragged away by Captain Bligh.’

Indeed, tourists often refresh themselves at the HMS O’Bounty,
an Irish bar with a difference – where there’s no shillelaghs,
pictures of the old bog road or anything to do with rebellion.

But the ghost of a short-haired, long-legged Patterdale terrier
sits in the corner with a pair of 18th century spectacles,
waiting for the spirits of Mary Delahinch, Michael McDevitt and Fletcher Christian.

A father for us all ►