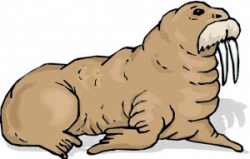 Young Dan
Grandad Flanagan sat on his stool to tell the children a tale he called,
‘Where there’s a walrus there is a way’.

‘Young Dan from Ireland’s lovely Dingle was always in trouble at school.
But it all changed when he found Wally, an amphibian mammal,
who, due to pollution, wouldn’t enter Mallybotton bay,
and so found herself in some distress.

But a cruising dolphin asked a seagull to fetch Dan,
who’d been studying Macmillan’s Guide to Sea Life,
and learned that the Atlantic coast was a really good place,
to spot dolphins and their cousins, the porpoise.

His discovery of a sea mammal caused such a stir,
that BBC reporter Molly McMenamaed knew she had to interview him,
but was obliged to take along a well-known comical celebrity,
some fellow called Paly or Palin, who had a lot of influence at the Beeb.

But down south, Dan’s uncle,
John Ponsonby-McStickerrick – he had a double-barrelled name
because his mum married a British officer,
during the War of Independence – worried about what
would come out of the lad’s mouth,
said, ‘Sure, the wee lad’s a right little gurrier,
making up stories about whales, porpoises and dolphins,
and besides, he’s got a stutter.’

But his granny replied, ‘Ah, but he has a fine voice.
I always thought he should be a priest,
but he’d have trouble with the sermons.’

But the cuddly sea mammal growled and threw fish at the film crew,
who asked Dan to intervene, due to the special rapport they enjoyed.

When he sang the walrus stopped its growling,
whistling through its big teeth,
a tune that, according to folk-music expert, Máiré Muckrickle,
resembled one by famous blind Irish harpist O’Carolan.
It was heard as far away as Tahiti in the Pacific,
with dolphins leaping in the air,
performing an ancient Celtic dance.

When Dan was informed of this, he said,
‘That’s where Captain Bligh took the mutinous HMS Bounty,
and then his sailors forced him to leave the ship.’

His granny said, ‘God save us, the wee lad’s always reading.
He lives in a world of cowboys, pirates and his favourite Red Indian,
Chief Sit-Upon-The-Fence.’

‘Don’t let him watch a western about General Custer.
He’ll tell you what really happened at the battle of The Little Big Horn,
and lament how that Irishman, Captain Benteen, was blamed for the great
disaster that befell the Seventh Cavalry.’

Next morning Dan went for a swim, a daily exercise to develop his lungs,
as instructed by his doctor, ‘Stethoscope’ Sean,
who’d encouraged him to take up athletics, particularly cross-country running.

He fondly remembered how he’d saved the old chap’s life,
after he'd fallen while climbing the MacGillycuddy Reeks,
and he’d had raced away to fetch the rescue team.

Resting on the beach, drifting off into a mindfulness session,
a new fad his big sister had told him calms the channels in his
brain which control speech, he heard a voice call, ‘Let me out!’

Upturning his shoe, he saw a crab which leaped into the arms of an octopus.
They both waved at him before disappearing, and he mused,

‘I seem to attract a variety of sea creatures,’
remembering what Gypsy Mary had forecast –
‘One day you’ll meet a big cuddly animal,
and it will cure you of your impediment.’

So, he slipped into the bay where Wally was slumbering.
‘Wake up,’ he whispered. Just then a familiar shape appeared,
festooned with a camera, and he recognised his pal, Snapalot Sinead.

Just then Odobenus Rosmarus, the Latin name for Wallies,
which Dan loved to quote,
to the amusement of his peers, eyed the young lad,
saying ‘Hey kid, I’ve got a great idea to boost tourism.

‘You can jump on my back and we’ll sail into the
bay while you recite the Wild Swans at Coole, WB Yeats’ great poem,
in front of that BBC fellow Paleskin, or whatever he’s called –
I did a sketch with when he was a
python you know – while I comb my fading whiskers
and wave a can of hair restorer donated by John McMonagle –
who runs a stall behind Flanagan’s bar where I go to sup thrown-away Guinness.

‘So, you were on the BBC?’ asked a starry-eyed Dan.

‘Yes, I remember the producer wouldn’t give me a fee,
and called me a ‘right wally’, blaming cutbacks. So what else is new?
But Michael said if our paths ever crossed he’d do me a good turn.’

So away they went, causing such a sensation that the owner of the village hotel
thought he could claim this creature as their own monster,
just like a hotelier is supposed to have done at that Scottish place, Loch Ness.
‘Isn’t that young Dan, the kid with the stutter?’ Asked his missus.

‘It’s a stammer,’ said their daughter, Marianne. ‘I heard that Palin fellow – you know,
the well-travelled comic who found a snake called a Monty Python,
on one of his travels for the BBC? – talk about his da,
who was a general practitioner.’

‘And here he is, Michael I mean, not his da,’
said his other female offspring, Sinead, ‘bringing Dan to have his picture taken.’

‘He’s swum off,’ announced Mr Palin, ‘but we’ve got enough footage.
He was scared the health and safety people would net him,
and he’d end up in a zoo, eating supermarket out-of-date rotting fish.’
‘
Now then children,’ said Grandad Flanagan,
if this story had taken place when I was a kid,
young Dan wouldn’t go on to become a famous comedian, like Frankie Howerd,
who, as a young man had an impediment, just him.’

Then a girl jumped up, declaring, ‘So did singer Ed Sheeran,
actor Samuel L Jackson and politician Joe Biden,’ adding,
'But, according to social media which, as we all know has replaced reality,
nowadays the political correction police would condemn Frankie’s humour.’

‘Yes,’ the old man replied, ‘but in the old days youngsters – like that famous Irish comic,
David Allen – who was successful on the BBC, until he let slip the F word –
would listen to auld ones like me, and thus created a personal, but unique Irish comical style.’

Then in walked in a nurse, who, being prim and proper,
called patients by their full Christian name,
and exclaimed, ‘Oh, there you are, Daniel!’
She was followed by the landlord of O’Malleys pub,
who said, ‘And give us back the stool!’

◄ What makes us human?

A lovely part of the world, the Dingle Peninsula, I'd love to see it again.
We were a typical R. Catholic family, but even though Dave Allen regularly took the urine out of the church, my mum and dad loved him-I think he spoke some home truths!😀