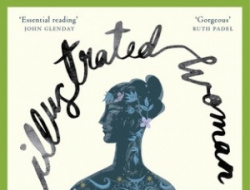 In The Illustrated Woman Helen Mort guides us through a roadmap of the body, its personal and political journeys, from adolescence to motherhood, to constructions of identity that question and shatter what has been expected of women throughout the ages. And as she raises questions, she proffers answers, answers which are often unexpected and unpredictable, which render them all the more vital.

In ‘Love Poem’ Mort brings a fresh take on an over-explained abstraction: love. In doing so, she illustrates the woman as a lover with a wide range of images and such lyricism and musicality, you can’t help but tap your foot as you read. The language is joyously northern at times and Mort is never afraid to go regional. It brings an authenticity and originality to her work which is not only fresh and contemporary but invites the reader into her version of love in the context of her corner of the world:

My love for you is like the Chesterfield canal, the first wall

with its spray-painted FUCK OFF, a gang of trees lining the bank

Mort’s ‘Love Poem’ is a screaming declaration. It’s occasionally a little dangerous too, even clandestine, a metaphoric underworld where dodgy deals take place in the blue hour before sunrise: “It’s the Peugeot and the BMW exchanging stolen goods/an hour before dawn.” Mort’s love is love that never forgets its past, a fiercely political love that laments “DEATH TO UK COAL, the ground they searched for the woman that never came home.”

These realities, this accumulation of events and contexts help shape our identity and Mort illustrates the complexities of how we choose to love. And whilst much of the love in ‘Love Poem’ is turned up to 10, Mort contrasts the loudness of love with quiet serene moments that are startling precisely because they rub up against the anthemic and radical images that precede them: “And my love for you is the light show/water makes beneath the Tapton Bridge in Summertime” … The shifts in tone, texture and diction in ‘Love Poem’ illustrate a poet bold enough to play with our senses, have us reeling in paroxysms of  FUCK YEAHS and then she goes and calms it all by saying something gentle about how the beloved crooked spire of her hometown “holds the sunset when you turn your back towards town”.

Mort illustrates motherhood profoundly and unpredictably throughout the collection. She addresses her son directly, in ‘Push the button, hear the sound’, a remarkable poem that goes way beyond  its educational counterpart, introducing a child to farm animals. It’s a dream of a workshop poem to show other poets how powerful repetition can be so effective and to reiterate Ezra Pound’s maxim to ‘make it new.’ The poem is full of surprises, from the big ticket things to listen out for as one negotiates life, to the exotic and wondrous, to the dangerous and political. The camera zooms out and then back into to the finer details of life at home:

Listen to the lorikeet’s whistling song.

Can you hear the call of the mynah bird?

Can you hear the flamingos in the water?

Can you hear your small heart next to mine

and the house breathing as it holds us.

But Mort goes beyond the small wonders of life and delves into the dangers and prejudices all around us to give her son a more rounded and comprehensive education, so he is fully prepared for sounds his talking book will never identify, such as racism, abuse and solar activity that may threaten our entire existence:

Can you hear the sleeping girls in Attercliffe?

Can you hear the sun dissolving?

Listen to the casual racists in the family pub.

Listen to the house shiraz, I drink as if

blooming in the vase of my chest

and listen to how I water it.

Here, Mort illustrates her own limitations, anxieties and vulnerabilities as she struggles to deal with her own existence. And she’s not afraid to fast forward to other horrors that will await her child as a teenager as she tells him to “listen to the panic in their emojis”. She doesn’t leave out the plight of our libraries either: “Can you hear the suburban libraries shutting? The books still breathing?” This startling representation of books as living things being buried alive exemplifies Mort’s habit of breathing life into everything that catches her eye. Throughout this rich and engaging poem, you can hear her South Yorkshire voice singing. It’s a song full of pain, joy and wonder. Rarely does a poet engage so completely and so comprehensively with the ‘political’ and the ‘regional’ while never forgetting to employ her beguiling lyricism that makes the poems so readable and enjoyable.

Elsewhere, Mort examines the literal illustrations via women who have expressed themselves through tattoos. She adroitly investigates the cultural and personal significance of art on the body and how tattooed women have been treated and regarded throughout history. In ‘Tramp Stamp’ Mort informs us “In Wedding Crashers Vince Vaughan says, ‘Tattoo? Might as well be a/ bullseye.’ ” Here, Mort reappropriates this idiotic and crass dialogue expressed in a Hollywood comedy blockbuster in a clever, slant way: “Scientists have found/that painting large eyes on the backsides of cows can protect them from lions and other predators.” This response could arguably be interpreted as something along the lines of if it stops dickheads like you bothering me, then that’s fine by me.

In ‘Tattooed lady’ we meet the fabulous Betty Broadbent, showing off her tattoo of “Madonna almost smiling from her back.” In the epigraph, Broadbent is quoted from the New York Times in 1939: ‘It hurt something awful, but it was worth it.’ This quote is loaded with significance, a fierce and rebellious fuck you from a woman happy to go under the tattoo needle to liberate herself from the shackles of what is expected of women by men of the time and the political and religious institutions so keen on telling her how she should live her life.  The startling final image of the poem shows us a tattoo of Betty herself 100 years later:

Betty in another century, in miniature,

an outline on a younger woman’s arm,

or Betty at the end, her hands steepled

The poet immortalises Betty here, celebrating her defiance and inspiration to women like her a century on.

Whatever woman Mort illustrates in this celebratory and defiant collection - shortlisted for the 2022 Forward prize for best collection - she does so with great lyricism which is distinct and northern. It’s a life-affirming book that illustrates women in myriad, engaging ways from lover, to mother, from feminist to poet. This is a poet in complete charge of her significant voice, a poet of great skill ensuring her work will be remembered long after women might choose to tattoo images of Helen Mort onto their arms 100 years from now, like they did with Betty Broadbent.