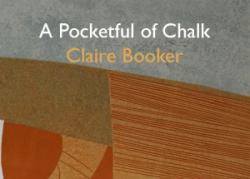 I emerged from Claire Booker’s A Pocketful of Chalk refreshed, as if from a journey across the downs and cliff-tops that she so clearly loves. In my reading I had accompanied the poet as she melded with the South Downs landscape in all of its dimensions: physical, emotional, ecological and temporal. She has a talent for communicating her sensory experience at all of these levels, in some poems interweaving subtle currents to hint at autobiography and loss. The first poem in the book sets out her dynamic agenda:

a Marbled White  to burn my eyes with its

This is a collection of remarkable honesty, breadth and depth. It’s full of Booker’s insights into her own experience and her perceptions at precise moments, seasons and times. ‘Looking Towards Smock Mill’ is an ecstatic view of long, late afternoon shadows across the landscape as the narrator gazes across downland and identifies with "my sister the smock mill" and tangentially with the two-dimensional chalk ‘Long Man’: "‘I’m Stilt Woman, Giantess of the Hill. / If I turn, I’ll vanish."

The Long Man has his own vision in ‘Long Man Dreaming’. Here the narrator is in the car park next to the ancient etched figure, when the landscape returns to its origins as a seabed. Her car takes part in the transformation:

Inside the carburettor   petrol chatters

its abrasive dialect of long-dead foliage …

The leather seats are growing

back their bones. The walnut dashboard    sways    gives shade.

A series of poems about memory and beloved people is introduced by ‘Bringing You Back’, a poem in memory of a friend. Inspired by a Buddhist bell that had been hers, the narrator sees a remembered image of her on a spit of land, "stooped in awe of shells I crushed / without seeing."

Memories of childhood and a ‘First Kiss’ follow, delicately evoked by "a landslip of sights … from the top of Folly Hill". In ‘Remembering Chocolate’ a father is lost to dementia but restored to the narrator by his care for her gift, and then reinvented as a musical instrument in ‘Anniversary’.

There are snapshots: a clifftop walk ‘Towards Beachy Head’, vivid with butterflies and birds, the "mew, mew" of buzzards. There’s human presence too, in the "white triangles inching along a swatch of sea", and the "clifftop boys" who gaze up as "a lark unravels its song, seamlessly". There’s a graveyard where "Obediah Legg, aged 67, waits for glory"; a grey heron, "God of pond" whose neck "stacks, unstacks, restacks" as it swallows "Two throatfuls of frog"; and an osprey with "inexplicable wings". In ‘The Fisherman’s Daughter’ the voice of a girl who "made a good catch", but knows she is trapped, speaks:

Once the little’uns arrived, I knew

there’d be no hole big enough to wriggle through.

That’s how it works.

Booker sees everything with a storyteller’s eye and writes in a poet’s rich metaphoric language. The poems in A Pocketful of Chalk are simultaneously personal, universal, mysterious and revealing. Anyone looking for a guide book of scenic walks in south-east England will be disappointed. This collection is very much more than that.

'While there is still some light on the page, I am writing now a history of snow' ►