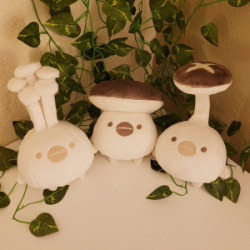 Because just now on telly, I saw a mushroom named 'HIDEOUS GOMPHIDIUS'.

I mean yes, my parents would surely been deemed PSYCHOTIC

If they'd have given me such a name

But who could have blamed

And I'd stand there... chuckling to myself.... raising my game-

My parents would *probably* remain loyal-

By phone saying: 'Hello? Is that Hideous?'....(and yes they *would* definitely silently recoil)...

It'd get the neighbours a-natter!!

'All press is good press', so they say.

There again.. it would probably keep my daughter away

From me for a while

She definitely would NOT SMILE

While stood next to me in line

'HIDEOUS GOMPHIDIUS, the Dr will see you now!!'. "You utter swine!!-

Mother, for changing your name!!"

The idea's therefore cancelled from my brain (booooooo!!!).

So 'Hideous Joanne Gomphidius'? ...it's been nice to know you-

For the fifty millionth time.

Thank you Bethany. I think I'd rather be called 'Ms Hideous Gomphidius'... than Lee, or Jamie, or Justine... 😎

Actually Jo, to me you look more like a Roxanne or Rosemary which are both lovely names but I agree, Joanne really is a bland moniker-don't tell your uncreative parents I said that! 😲

Those unusual ornaments featured in the accompanying image?
very unusual! if I were to name them, I would call one Lee, one Jamie, and one Justine-oh! I really LOVE those names-do you?

I much prefer 'Joanne'.
Easier on the ear😄