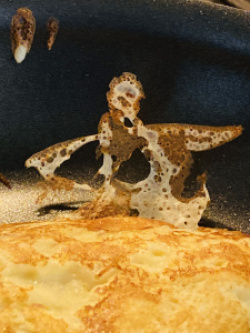 Here's a long story I am going to tell,

About a guest from The Netherlands: 'The Guest From HELL'.

Girlfriend of a relly

Who grew up with no telly.

A professional girl with a Burberry scarf-

She never said 'thanks', she never had a larf-

She never cleared her trash, water not 'hot enough' for her bath-

Conversation too boring, she would have been snoring-

Out) while others sat eating and chatting-

She was honestly just sat there batting

Around on Candy Crush, I bloody saw her!!

She (she really did!!) described herself as a 'whore'-

Before meeting her boyfriend

Apparently both of them tend

To fuck around with whoever whenever

Not edgy and cool

A week of arrogance and complaint

Either that or not good enough-

For this special Dutch-

Within her personality, and someone who hates

It when her pancakes aren't crispy-

To march back in the kitchen-

Where the pancake-maker was bitchin'

To serve pancakes for FOUR-

When she demanded more cooking

For *our* pancakes which were YET TO BE SERVED

Out to other members of the herd

We *had* all put HER FIRST.

With pan in hand

Put it back in.

It's Pancake Man lurking and surfing

Around on the rim.

To scold her and tell her 'Just eat your damn food'!!

She stayed for a week and didn't say 'bye'

As I'd had time to eye

The number of times she never said thanks

With the rest of us, she didn't give a shit

We were scum and she was 'IT'.

She stole some sunglasses I left for her use-

Right into her case without me knowing-

She was determined not to be seen showing-

ANY thanks to her hosts for the things that they gave,

She was probably planning to scoop up some pounds!!

From their sale on Ebay or Vinted or Depop

And now actually yes, she DOES have to drop

Them back to where we can retrieve them from.

This is NOT..... the person you want for your son.

Pancake Man rose up to give her a warning-

Be humble, be nice; don't be a bored or yawning

This Isn't The Way ►