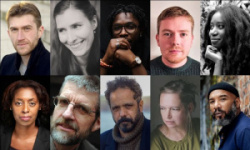 Organisers have announced the shortlist for the £25,000 TS Eliot prize, selected by judges Jean Sprackland (chair), Hannah Lowe and Roger Robinson. The list includes one previous winner, and five debut collections. Jean Sprackland said: “The 10 shortlisted books are unflinching in their explorations of love and grief, brutality and desire. They are alive with insects and angels, psychedelic plants and deep-sea fish; and haunted by the ghosts of Caravaggio and Daniel O’Connell. The English of these books is supple and shapeshifting, inflected with Yoruba, Newry street dialect, and the rhythms of Caribbean speech. These are books that thrilled, surprised, and struck us to the heart.”

Here is the shortlist:

Victoria Adukwei Bulley is an alumna of the Barbican Young Poets and a recipient of an Eric Gregory award. She has held residencies in the US, Brazil, and at the V&A Museum, London. Her debut pamphlet, Girl B, was published by the African Poetry Book Fund in 2017. She is the recipient of a Techne scholarship for doctoral research at Royal Holloway, University of London. Quiet is Victoria’s debut collection.

Jemma Borg won the inaugural Ginkgo prize in 2018 and The Rialto/RSPB Nature and Place competition in 2017. Her poems have appeared in the TLS, The Poetry Review and Oxford Poetry, and in the anthologies Out of Time (Valley Press, 2021) and Places of Poetry (Oneworld, 2020). Her first collection, The Illuminated World (Eyewear, 2014), won The Stare’s Nest Fledgling award and the New Writing Ventures Award for Poetry.

Anthony Joseph holds a PhD in creative writing from Goldsmiths University and is a lecturer in creative writing at King’s College London. He is the author of five poetry collections: Desafinado, Teragaton, Bird Head Son, Rubber Orchestras and, most recently, Sonnets for Albert, published by Bloomsbury. As a musician he has released eight critically acclaimed albums. He is also an award-winning novelist.

Zaffar Kunial published a pamphlet in the Faber New Poets series in 2014. He is a past winner of The Poetry Society’s Geoffrey Dearmer Prize and a former Poet-in-Residence at the Wordsworth Trust. His debut collection, Us (Faber & Faber, 2018), was shortlisted for a number of prizes. Six, his pamphlet of cricket poems, was published in 2019. He was a 2022 recipient of the Yale University Windham-Campbell Prize. England’s Green is his second collection.

Mark Pajak has received a Northern Writers’ Award, a Society of Authors’ Grant, an Eric Gregory award and a UNESCO international writing residency. He is a past recipient of the Bridport prize and has three times been included in the National Poetry Competition winners list. Slide is Mark’s debut collection.

James Conor Patterson won an Eric Gregory award for bandit country in 2019. His poems have appeared in Magma, The Poetry Review, The Stinging Fly and elsewhere and he was recently shortlisted for The White Review Poet’s Prize. His journalism and non-fiction have been widely published and he is editor of the anthology The New Frontier: Reflections from the Irish Border, published by New Island. Bandit country is James’s debut collection.

Denise Saul – The Room Between Us (Pavilion/Liverpool University Press)

Denise Saul is the author of two pamphlets: White Narcissi (flipped eye, 2007), a Poetry Book Society Pamphlet Choice; and House of Blue (Rack Press, 2012), a PBS Pamphlet Recommendation. She is a past winner of The Poetry Society’s Geoffrey Dearmer Prize. Denise holds a PhD in creative writing (poetry) from the University of Roehampton. The Room Between Us is Denise’s debut collection.

Yomi Ṣode was a 2019/20 Jerwood Compton Poetry Fellow and was shortlisted for the Brunel International African Poetry Prize 2021. His one-man show COAT toured nationally. In 2020 his libretto Remnants, written in collaboration with composer James B Wilson and performed with Chineke! Orchestra, premiered on BBC Radio 3. Manorism is his debut collection.

◄ 'This sea: a Chevy engine revving high reminding me how everything’s design'