The Presence and the Dream: edited by Serena Trowbridge and Sarah Doyle 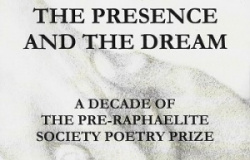 The Pre-Raphaelites are a beloved part of this country’s cultural fabric. And so an anthology of a decade of the Pre-Raphaelite Society poetry prize is not such a niche product as it might first appear. For one thing, it’s always good if a poetry organisation doesn’t take itself too seriously. I was delighted to find among the prize-winners a comedy poem about William Morris, laced with a touch of Plath. ‘Wallpaper Man (It’s Over)’ by Rosie Miles includes these lines:

you’re a man in your prime,

but William, these days our rhythms and rhymes

(please, no more chintz or carpets from Merton);

‘Christina Responds Badly to Poetry Criticism’, by Emma Purshouse, provides another chuckle. It is based on a pen and ink caricature by Dante Gabriel Rossetti of Christina Rossetti reacting to a review of her poetry in the Times of 1862.

You would expect that in such a volume that the figure of Shakespeare’s tragic Ophelia – subject of Millais’ famous painting – would loom large. Indeed, ‘Reflections of Ophelia’, by one of the anthology’s two editors, Sarah Doyle, is the long, opening poem, and is laden with references to Hamlet:

And so, to slip, perchance to drown –

to cast aside my weed-spun crown

and let the water’s fingers bear me down.

Knights, ladies, and Avalon mingle with the painters Rossetti, Ford Madox Brown, Holman Hunt and Millais within these pages. Geraldine Clarkson’s The Blue Bower’, a competition runner-up in 2013, is after the eponymous painting by Dane Gabriel Rossetti. Her poem looks at the painting from the perspective of the model, Fanny Cornforth (the excellent notes at the back of the book tell me), and end with these chilling words: “And at my throat, does he see garnets / like gobbets of blood?”

Wendy Holborrow’s ‘The Noble Working Men: The Navvies’, an abridged sonnet sequence that is part of a larger collection of poems, and was the 2016 winner, takes as its theme Ford Madox Brown’s notable painting Work, which is crammed with labourers engaged in different tasks. Holborrow’s sequence here includes separate sections about Adonis, The Shoveller, The Ale Drinker, The Hod Carrier, The Pipe Smoker, and The Ginger-Haired Navvy. In a prologue she says:

We see, but do not smell the scent of sweat,

from working in the heat of summer sun

as they strain and stretch and are subservient

until the end of day when work is done.

There is also a poem about ‘Effie’, runner-up in 2020, by Andrea Small. It’s one of the most romantic of the Pre-Raphaelite stories, about the famous critic John Ruskin, entranced by art but refusing to pay attention to his young, beautiful, anguished wife:

His pens, his ink, he stows with equal care,

checking they are dry and not about to leak.

I swear I should not be surprised if he sang them a lullaby.

There are many other treasures in this anthology that I haven’t mentioned. And the notes explaining the context of the poems, organised by editors Serena Trowbridge and Sarah Doyle, send you back the paintings themselves, for a fresh look.

The Presence and the Dream can be purchased for £10 including p&p, by emailing Serena Trowbridge, chair of the Pre-Raphaelite Society, at serena.trowbridge@bcu.ac.uk

◄ 'Don’t go down to the Railway Inn with anyone else but us!': Write Out Loud's poetry jam returns to Marsden jazz festival venue